Film / Salt of the Earth 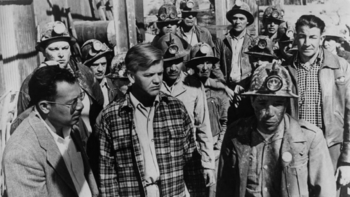 Workers of the world unite!
"I don't want to go down fighting. I want to win."
— Esperanza
Advertisement:

Salt of the Earth is a 1954 independent film directed by Herbert J. Bieberman, written by Michael Wilson, and produced by Paul Jarrico.

It is a dramatization of a real miners' strike in New Mexico. Esperanza and Ramon Quintero are a married couple living in the company town of Zinc Mine; Ramon is a miner. All the miners are exploited by their callous employers at Delaware Zinc Inc., but the Hispanic miners have it even worse, living in sad company shacks that lack running water. When Delaware Zinc's cheapskate insistence on having the Hispanic miners work alone instead of in pairs leads to a man nearly getting killed, the miners go on strike.

The strike is a months-long ordeal. Delaware Zinc tries to get scab workers through the picket lines but the union holds fast. Ramon spends thirty days in jail on trumped-up charges of assaulting a scab. The strike seems to be doomed when Delaware Zinc obtains a Taft-Hartley injunction requiring the miners to give up picketing or face arrest. However, one of the miners' wives notes that while the miners can no longer picket, the injunction doesn't say anything about the wives doing the picketing.

The wives take their place on the picket line. While they are successful in keeping the mine closed and frustrating the will of Delaware Zinc, the role reversal does not go down well with many of the miners. Ramon in particular is not happy about being left with the housekeeping and domestic chores while Esperanza leads the wives on the picket line.

Salt of the Earth proved highly controversial in the era of the Red Scare and The Hollywood Blacklist. Bieberman, Wilson, and Jarrico had all been blacklisted for their left-wing sentiments; Bieberman in fact was one of the infamous "Hollywood Ten" who were held in contempt of Congress for their refusal to name Communists in the movie industry. Salt of the Earth was Bieberman's first job after spending six months in prison. Additionally, the International Union of Mine, Mill and Smelter Workers, which was behind the Real Life strike and which financed the film, had been booted out of the CIO in 1950 for having Communists in its leadership. As a result, the film was almost completely suppressed in the United States in 1954, appearing in only 12 theaters.

The movie featured only five professional actors: the three evil white company men, the evil white sheriff (Will Geer, who later played Grandpa on The Waltons), and Rosaura Revueltas, who starred as Esperanza. The other actors were local people and members of the real International Union of Mine, Mill and Smelter Workers, Local 890.

Compare Letters From Marusia, a Mexican film with a similar story about heroic strikers.