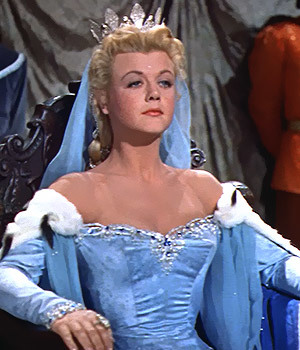 The bodice, hairstyle, makeup, and especially the tan lines, are more accurate for 1955 than 1255.
Advertisement:

Due to factors ranging from budget to Artistic License, period costuming in shows and movies is just downright inaccurate half the time — and that's not even counting instances of Reality Is Unrealistic where there's a justification for the anachronistic elements. This extends well beyond clothing and accessories: period-accurate hair and makeup are even harder to find in Hollywood.

Sometimes costumes are accurate to one historical era or style, but not the particular one relevant to the story. Sometimes the costumes have more to do with the contemporary fashions of the production rather than those of the story's setting. Sometimes the costume designers will just decide to throw historical accuracy to the wind and go for creativity and visual impact instead — this often happens with Pimped-Out Dress scenes, especially if the historically accurate version wouldn't create the right impression on the audience.

This is actually Older Than Print. Up until the Enlightenment, most Western European visual artists had little to no idea what ancient Middle Eastern or Greco-Roman clothing looked like — and would likely have been deeply scandalized if they did — resulting in hundreds of Biblical or mythological characters in full medieval or Renaissance dress. In Shakespeare's time, theater troupes used the cast-offs of wealthy patrons as costume wardrobes, recycling outfits across many productions. Victorian reprints of Jane Austen's novels often had new illustrations depicting the characters in modest Victorian clothing rather than the comparatively skimpy light muslin dresses of the Regency era. And in The Golden Age of Hollywood, certain movie costumes have been marketed to sewing pattens and altered to be more budget-friendly, easy to sew, and in-line with contemporaneous silhouettes.

Note that to count an example must take place in a Real Life historical era, not a neo-historical future or a Fantasy Counterpart Culture.

A Sub-Trope of Hollywood History.

A Super-Trope to Gorgeous Period Dress and Hollywood Military Uniform.