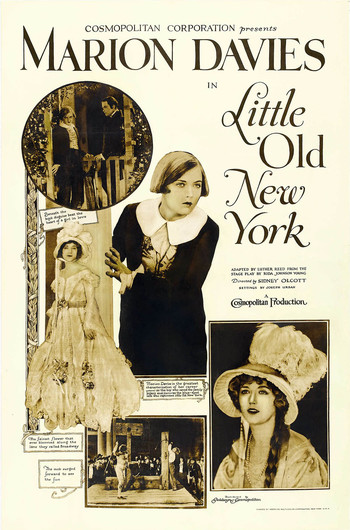 You can't even tell she's a girl when she's wearing boys' clothes!
Little Old New York is a 1923 silent film starring Marion Davies and produced by her paramour, William Randolph Hearst. It was based on a 1920 play of the same name by Rida Johnson Young. In 1940, the film received a sound remake.
Advertisement:

New York City, 1807. Wealthy Irish immigrant Richard O'Day is leaving his fortune to Patrick O'Day, a nephew back in Ireland. Oops, Patrick just died. Patrick's father, John O'Day, does what anyone would do in this situation, which is to say that he disguises his daughter Patricia as Patrick so they can still get the money. That puts Larry Delavan, who would have gotten the inheritance if not for these shenanigans, into a difficult position. He now has to find some other way to come up with the $10,000 that Robert Fulton needs to build his newfangled steamboat invention. Meanwhile, Pat develops a crush on Larry just as he's being courted by the ladylike Ariana du Puyster.

Considering how many silent films have been lost in fires, Little Old New York is notable for almost being lost in a fire while it was still being made. The negatives were saved, but the studio burned down. All the sets and costumes had to be recreated in order to film the remaining scenes. Miraculously, the movie was still completed in time for its scheduled release date. It proved to be a critical and commercial success.