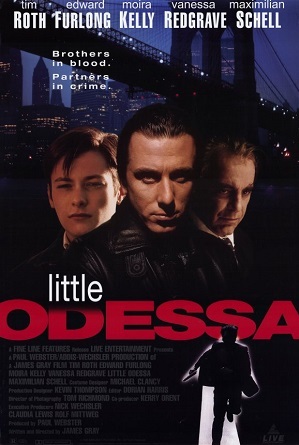 Little Odessa is a 1994 American movie about the Russian-Jewish immigrant community in Brighton Beach and the bad things that happen to one particular Dysfunctional Family. It consists of Arkady, the adulterous father who makes ends meet working at a newsstand; his wife, dying of a brain tumor; and the younger son Reuben, a soft-spoken, clever boy intent on cutting school, smoking weed, and watching movies. There is also an elder son, Joshua (Tim Roth), who is a hitman for the Russian Mafia and was therefore banished from home. He has to return to Brooklyn to off an Iranian jeweller, and awkwardly tries to make peace with his family in the process. It does not go well.