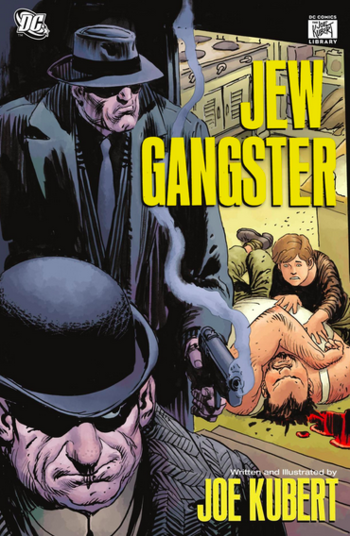 -Click- Shalom
"I used to tell Lansky that he may've had a Jewish mother, but someplace he must've been wet-nursed by a Sicilian."
— Charles "Lucky" Luciano

In fiction, the Kosher Nostra are rare, probably because Jewish organized crime tends to be rolled into other, larger organized criminal groups. In truth, the Jewish community was often too small to be the single dominant organized mob, and Jewish mobsters often made strategic alliances with a larger group, often ending up serving as advisers and technicians. From about Prohibition to some time in the 1960s or 1970s, the main allies were the Italians. Nowadays, the Jewish mob is mostly focused in Israeli or Russian mobs (and as such, are more likely to qualify as Ruthless Foreign Gangsters). Still, they tend to pop up often enough in early-mid 20th century period pieces, particularly in Los Angeles and pre-Castro Cuba. There's also an overlap with London Gangster, as during the late nineteenth and early twentieth century many poor immigrants in London were Jewish, and several real-world London gang leaders of the era, like Isaac "Ikey" Solomon and Jack "Spot" Comer came from that background.

Jewish gangsters are usually distinguished from other, more typical mobsters by focusing their intellect and business acumen on the pragmatic pursuit of profit over more personal concerns. Some works may also juxtapose contrasting stereotypes of Jewish and mobster behavior. These characters may kvetch, argue and self-deprecate like a typical nebbishy Jew, but also display an surprising Hair-Trigger Temper and Ax-Crazy capacity for violence.

Transparent No Celebrities Were Harmed versions of the most famous Real Life examples, Meyer Lansky and Bugsy Siegel, are particularly common (Lansky's friends joked that he behaved more "Italian" than most Italians). Historically, the Jewish Mob was a dominant force in the brief period between when White America started seeing Irishmen as "white" and the rise of the more numerous Italian Mob. During that period, they were involved in the regularization and "professionalization" of organized crime in the US, with the establishment of The Commission (the Italian-American Mafia's coordination/dispute-resolution body) and Murder, Inc. (organized, professional hitmen) being the brainchildren of Jewish mobsters (the Commission and Murder, Inc.'s parent organization, the National Crime Syndicate, were specifically Lansky's ideas).

Compare The Mafia, The Mafiya, The Cartel, The Triads and the Tongs, Yakuza and The Irish Mob.