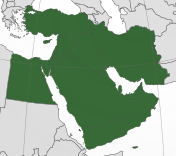 One of the world's most volatile regions, the traditional definition of the Middle East, pictured to the right and which the countries listed down below go by, are the countries of Western Asia that are south of The Caucasus.
Advertisement:

The Greater Middle East political definition, coined in the early 2000's by the George W. Bush administration, throws in the entirety of North Africa as far west as Morocco (while the traditional Middle East only includes Egypt, as it is a transcontinental country in both North Africa and Western Asia), as well as Mauritania in West Africa, Djibouti and Somalia in East Africa, and Afghanistan and Pakistan in South Asia, fitting more closely with the Arab World and/or the Muslim world

(note that the three terms are not synonymous). The Caucasus and Central Asia are sometimes also included in the Greater Middle East due to sociopolitical connections. Some particularly ignorant individuals equate "The Middle East" with "anywhere where Muslims are the majority", which is a major Critical Research Failure since hundreds of millions of Muslims live far away from the traditional Middle East, and in decidedly non-dry places too.note Sure, it is easy to conflate Afghanistan and Pakistan with the Middle East since they border Iran and have deserts, but do you really want to include lush, green Bangladesh as well? How about Indonesia? Furthermore, Southern Europe, which is very much a part of the West, has several Muslim-majority countries in Kosovo, Bosnia and Albania. The Near East, mainly in texts originating in Europe (both English and foreign texts), is described as the Levantnote Cyprus, Israel, Palestine, Syria, Lebanon and Jordan, as well as Hatay Province in Turkey plus Iraq, while the Middle East is the area around Iran, Afghanistan, and Central Asia. This can cause a mess for translators as well, so you always better make sure what the author's definition of the term is and preferably attach your own definition if writing about it yourself.

The Middle East is generally considered the "cradle of civilization"note to the West, at least; it is now generally accepted that multiple civilization cradles sprung up across the world independently from each other; the earliest civilizations in the world (in the modern sense of the word) - Sumer, Akkad, Assyria, Babylon and Elam - developed in Mesopotamia (modern-day Iraq) and the surrounding areas about 5000 years ago; Ancient Egypt showed up at about the same time as Sumer, and Egyptian and Mesopotamian empires would later trade territory in the Levant. Anatolia, meanwhile, was home to the Hittites, the world's earliest Indo-European civilization. The whole area served as an important cultural and trade center in ancient times. It was the birthplace of several major religions, the most famous being the Abrahamic faiths of Christianity, Islam and Judaism, but also other historically-important ones like Zoroastrianism and Gnosticism. It should also be noted that the oldest known law code to date, the Code of Ur-Nammu (circa. 2100-2050 B.C.), is also from Mesopotamia.

One should note that not all of the Middle East is autocratic and theocratic like Saudi Arabia. Some states are more liberal (and desert-covered) than others. Additionally, not everyone in the Middle East is even Muslim, as Egyptian Coptic Christians, Israeli Jews, Lebanese Maronite Christians and Iranian Zoroastrians, among others, would point out. Likewise, even leaving aside Turkey, Cyprus, Israel and Iran (Turks, Greeks, Jews and Persians, respectively), not everyone in the Middle East is Arab, as Assyrians, Azerbaijanis, Balochs, Circassians, Kurds, Lurs, Turkmens, and migrant South Asians would point out.

Also note that the region is not just a big desert. The Middle East is actually very mountainous in many places, as it sits on top of the intersection between several geological plates. It just happens that a major part of the region is arid and covered in sand. Countries like Iran, Israel, Lebanon, and Turkey have more proportion of arable land and forest than desert. Oh, and it snows in the Middle East, with Iran, Lebanon, and Turkey having ski resorts and Iran being hit by the deadliest blizzard in history in 1972.