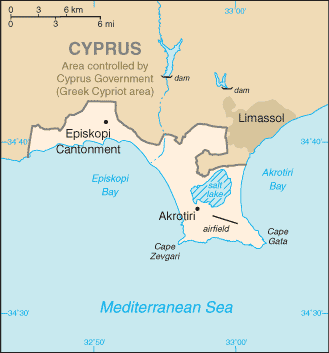 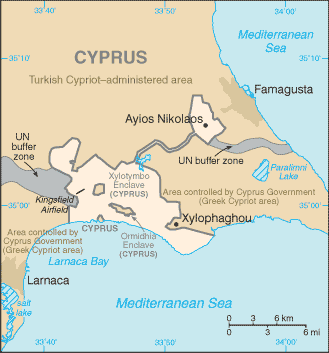 Top: Akrotiri, Bottom: Dhekelia
Akrotiri (Greek: Ακρωτήρι; Turkish: Ağrotur) and Dhekelia (Greek: Δεκέλεια; Turkish: Dikelya), officially known as the Sovereign Base Areas of Akrotiri and Dhekelia (Greek: Περιοχές Κυρίαρχων Βάσεων Ακρωτηρίου και Δεκέλιας, Periochés Kyríarchon Váseon Akrotiríou kai Dekélias; Turkish: Üs Bölgeleri Ağrotur ve Dikelya), are the areas of Cyprus still under British control and are a British Overseas Territory, being retained by the British after the rest of Cyprus was granted independence in 1960 in the London and Zurich agreements, and include British military bases and installations. The territory is composed of two Base Areas: Akrotiri, also known as the Western Sovereign Base Area (WSBA), which includes two main bases at RAF Akrotiri and Episkopi (which functions as the capital of the territory), plus all of Akrotiri Village's (which is the largest civilian settlement of the territory) district (including Limassol Salt Lake) and parts of eleven other village districts, and Dhekelia Cantonment, also known as the East Sovereign Base Area (ESBA), which includes a base at Ayios Nikolaos plus parts of twelve village districts.
Advertisement:

The territory serves an important role as a station for signals intelligence and provides a vital strategic part of the United Kingdom communications gathering and monitoring network in the Mediterranean and the Middle East, being close to the Middle East and Suez Canal with the ability to use the RAF base for training and as a staging post for military aircraft. The territory is administered by an Administrator who is also the Commander of British Forces Cyprus and is officially appointed by the British monarch on the advice of the Ministry of Defence, with the Administrator having all the executive and legislative authority of a governor of an overseas territory. A Chief Officer is also appointed, and is responsible to the Administrator for the day-to-day running of the civil government, with subordinate Area Officers responsible for the civil administration of the two areas. No elections are held in the territory, although British citizens are normally entitled to vote in United Kingdom elections (as British Forces or overseas electors). The areas also have their own legal system, distinct from the United Kingdom and the Republic of Cyprus, which consists of the laws of the Colony of Cyprus as of August 1960, amended as necessary. The laws of Akrotiri and Dhekelia are closely aligned with, and in some cases identical to, the laws operating within the Republic of Cyprus. 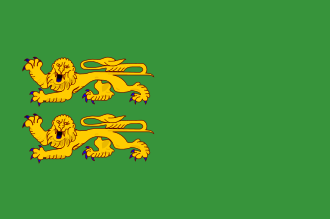 This flag is the unofficial flag of Akrotiri and Dhekelia, widely used within the territory and by the Dhekelia Garrison, while the British Union Jack is the official flag. It consists of a green field with two gold lions from King Richard I of England's coat of arms, because of his conquest and creation of the Kingdom of Cyprus.
The British National Anthem
God save our gracious Queen!
Long live our noble Queen!
God save the Queen!
Send her victorious,
Happy and glorious,
Long to reign over us:
God save the Queen!
GovernmentMiscellaneous