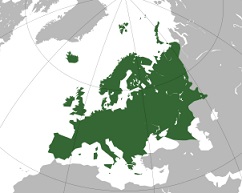 The daughter of Elysium.
"Whatever else may divide us, Europe is our common home; a common fate has linked us through the centuries, and it continues to link us today."
— Leonid Brezhnev
Advertisement:

The second smallest continent after Australia/Oceania, but the third most populous after Asia and Africa, Europe nonetheless became the crucible of contemporary civilization in the last millennium. Empires, kingdoms, and states on this continent developed progressively and rapidly in knowledge, politics, society, and technology, which bolstered their maritime powers and allowed them to project themselves worldwide, with the United Kingdom, France and Spain becoming particularly prominent among the European powers. There is little in the world that has not come into contact with Europe somehow and been affected by its legacies and policies. They are primarily responsible for the settlements of North and South America, and their colonial outposts in these continents (which they nicknamed "the New World") have gone on to become great nations in their own right and major population centers. In addition, their colonial conquests played a major role in the development and modernization of Africa, Asia and Oceania to the point that European languages have been exported around the world and are now spoken by far more non-Europeans than Europeans themselves, although their colonization of Africa and Asia also created many problems in those continents that linger to this day and stunt their growth. Many popular foods eaten worldwide, such as hot dogs, pizza and spaghetti, also originated in Europe and were brought to other continents by European immigrants. Ancient European mythology is a popular theme for films, literature, TV shows, and video games, particularly Greco-Roman and Norse mythology. Likewise, the names of the other continents and most landmasses and nations were coined by Europeans in ancient, medieval, and modern times. It is almost impossible to understand our world without a good understanding of European history and society. The very word "Eurocentric", coined to signify and escape its overwhelming influence, pays homage to and reinforces its central role in modern consciousness.

Europe is considered the progenitor of Western civilization, burdened with a civilizing mission that often undergirded its conquests and settlements of other lands and peoples. While Europe is the source of many cultural and political achievements, historical monuments, and inventions, it also has a dark and violent history full of conflict. The continent boasts an astonishing legacy of cultural, intellectual, and social advancement, being the center of The Renaissance, The Enlightenment, the Industrial Revolution, and the scientific revolution, alongside our contemporary Political Ideologies, but was also a battlefield for a large portion of its history, and was the primary terrain of World War I and World War II, the two most destructive wars so far in history.

Europe's worldwide influence declined due to the tremendous loss of life and damage taken to its infrastructure, military power, and resources from the World Wars, as well as the major European powers losing control of their colonies worldwide. North American global influence surged, and North America soon replaced Europe in much of their role worldwide, with the United States coming into prominence as one of the three Superpowers left after the World Wars, the others being the United Kingdom and Soviet Union. Europe would find peace for some time after World War II, though would spend a lot of that peace split into two halves by the United States and the Soviet Union, with the US-allied countries forming NATO and the Soviet Union-allied countries forming the Warsaw Pact. The United Kingdom soon lost its Superpower status after the Suez Crisis of 1956. The Soviet Union would later collapse in The '90s, dissolving the Warsaw Pact, reuniting the two halves of the continent, and leaving the United States as the only remaining Superpower in the present. The history of Europe is equal parts glorious and equal parts tragic. Fittingly enough, the name "Europe" is derived from the name of the mythical rape victim Europa.

Since the designation of lands as continents is arbitrary, the territorial extent of Europe is largely a cultural, economic, and political designation rather than a geographical one. Europe's largest and most populated country is Russia, which is a transcontinental state that extends from Eastern Europe all the way across North Asia to the Pacific Coast, where it shares land and sea borders with the United States, China, North Korea, and Japan. Turkey is another transcontinental state that culturally and historically has played a major role in Europe and Asia, especially in Southern Europe and Western Asia, but for cultural, nationalistic, and religious reasons is generally not considered European. Other states are usually considered European for cultural rather than geographical reasons (Georgia, Azerbaijan, Kazakhstan, Cyprus, and Armenia), despite being, in the case of the latter two, geographically entirely Asian. Furthermore, there is no true continental divide between Europe and Asia (hence the "Eurasian tectonic plate"), and some even regard Europe as an Asian subcontinent with delusions of grandeur. What defines Europe is the common interconnected, intricate history where various empires and kingdoms were at various times colonized, conquered, occupied, and settled by one or another, a common experience that they then exported to the rest of the planet. So how one defines Europe is likely to speak one's own political and social views — for example, The Iron Man includes the line "all the countries of Europe can fit easily into Australia," which may confuse many modern readers unless they know that, to Ted Hughes, "Europe" stopped at the Iron Curtain — as much as it is a cold geographical assessment. Even areas whose "Europeanness" are unambiguous to non-Europeans, such as the British Isles, Scandinavia, the Balkans, Russia west of the Urals, etc — are regarded by its own residents as being apart or different from the continent. Europe is also sometimes merged with Asia as Eurasia, or Africa and Asia as Afro-Eurasia, which makes geographical sense, but is not quite acceptable politically.

For the list of tropes related to Europe and Europeans, see the Europe Index.

If you're looking for the Swedish rock band, click here or in the "Music" link up there. 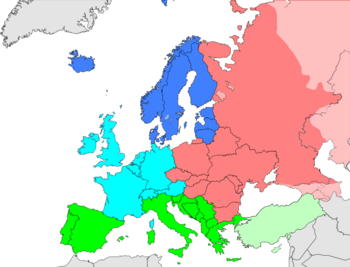 Useful Notes and other articles related to Europeans and European culture

See France, Germany and United Kingdom for everything solely related to those countries

See Greece, Italy and Spain for everything solely related to those countries

See Finland, Norway and Sweden for everything solely related to those countries

See Czech Republic, Poland and Ukraine for everything solely related to those countries