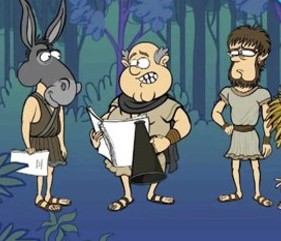 Someone should tell Bottom to do a bit less improv.
Advertisement:

The mummers play is a form of traditional theatre originating in England.

Traditionally, mummers plays are performed by a group of amateur actors (called mummers), and are barely rehearsed and prone to go off at improvised tangents, often with the audience heckling, cheering and booing. The mummers used to wander from farmhouse to farmhouse to perform their play, nowadays mummers plays are frequently performed in pubs, village squares, and similar places. Because of the ad hoc nature of their performance spaces, Mummers often have to ask their audience to "make room" so they can perform the play.

In most places, the mummers appear during the Christmas season, pretty much the period from Halloween to "Plough Monday" (The first Monday after January 6, when ploughmen traditionally had to go back to work following the Christmas holiday). In some areas the play is instead performed at Easter time.

The actual script and story varies from area to area, but they almost always involve a Sword Fight ending in a death, and a doctor bringing the dead man back to life. It used to be thought that the plays were derived from an old fertility ritual. Modern scholars no longer believe this, but still have no idea where they came from and how they originated. They seem to have become widespread over England and parts of Scotland, Wales, and Ireland by the late 18th century, and have been found as far away as the Caribbean and even Kentucky.

The sword fight is typically between Saint George ("Yay!") and either the Turkish Knight or an enemy called "Bold Slasher" ("Boo! Hiss!" for both of these fellows). Depending on the area, either combatant can end up being killed and resurrected (one old script has the stage direction "decide which is to be dead man, and make a good fight"). The other characters, besides the doctor (usually a quack), tend to be an odd mix of traditional figures such as Father Christmas, Robin Hood and Beelzebub. Traditionally, the whole cast, including female characters, was composed of men. These days, the tradition of having female parts played by men has been retained, with the result that female mummers have to play male roles. So it now possible to see Mummers plays where every character is played by an actor of the opposite sex!

The tradition largely died out in many areas, largely replaced by the slightly similar tradition of Pantomime. But in some areas the custom has never died out, and in others the old plays have been revived.

The XTC album Mummer was inspired by these plays, and its booklet had photographs of the band wearing traditional Mummers' costumes, complete with instructions on how to make your own. Loreena McKennitt's 1998 hit "The Mummers' Dance" further immortalized these plays.

(Not to be confused with Philadelphia and their Mummers...or their parade