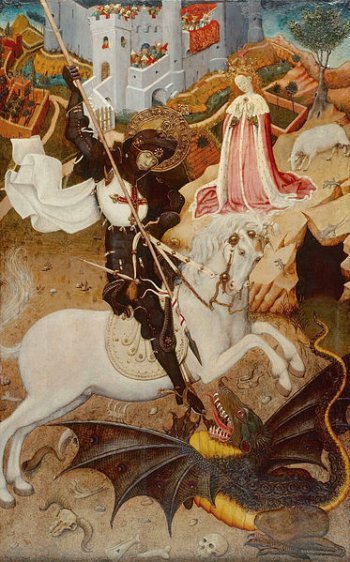 According to Christian legend, Saint George was an officer in the Roman army who was tortured to death for his Christian faith in 303 AD. St. George has been venerated as a martyr since the 4th century especially by the Eastern Churches, but around the time of the Crusades he became even better known as the hero of a legend that depicted him as a dragonslayer. It is chiefly in his dragonslayer role that St. George was introduced to Western Europe and became the supreme patron saint of knights and soldiers, eventually making him one of the most popular saints ever. He is also the Patron Saint of England. The Cross of St. George (the famous "Crusader Cross" of a red cross on a white field) is today used as the flag of England, and is represented on the Union Jack along with the Crosses of St. Patrick and St. Andrew.

The history behind the legend is murky. While it is plausible enough that a Christian called George was executed in 303, all other details depend on the source: The widely accepted versions of the legend place George's martyrdom either in Lydda, Palestinenote Today Lod in Israel, or Nicomedia in Bithynianote Modern İzmit in Turkey, and identify Emperor Diocletian as the responsible pagan ruler; but the earliest accounts actually place it in Persia, not the Roman Empire. To some, St. George is also known as 'St. George of Cappadocia' because he was supposedly a native of that region, but other traditions have him born and raised in Palestine. Historians have thus questioned whether he existed because of this, though most view it as plausible (even if the details are sketchy, as seen above).

St. George and the Dragon

The popular legend of Saint George's fight with the dragon is only as old as the 11th century, the oldest known written version coming from Georgia (Europe). The tale exists in a multitude of variants, but a synoptic plot goes like this:

A city is harassed by a dragon that lives in a nearby lake. At first, the townsfolk appease the monster by giving it their cattle but when their lifestock runs out, they end up feeding their own children to the beast. The offerings are determined by lot.

One day, the lot of the only daughter of the king of the place comes up. The princess is sent out to the dragon and waiting for her doom when a lone knight, Saint George, happens to ride by. Told about the situation, he promises to save the princess in the name of Jesus.

One exciting fight later, George ties up the dragon and drags it into the city. The townsfolk are terrified, but Saint George assures them the power of Christ has defeated the monster, and promises to finish it off if they will become Christians. The king and the citizens consent, and George sends the monster to dragon heaven.

Everybody celebrates and the king wants to reward Saint George. But George declines all worldly rewards and instead makes the king give the money to charity. After making the townspeople promise to be good Christians, George rides away, possibly into the sunset.

The localization of the legend varies: In the Georgian version the town saved by George is called 'Lasia', but in The Golden Legend it is 'Silene in Libya' (the identity of these places in uncertain). In the Middle East, the spot where George killed the dragon is traditionally identified as Saint George Bay near Beirut. The legend is also recognized among Muslims of the same region, some of whom postulate the dragonslayer was really the immortal Al-Khidr.

The legend of St. George, as told in The Golden Legend (13th century), can be read here