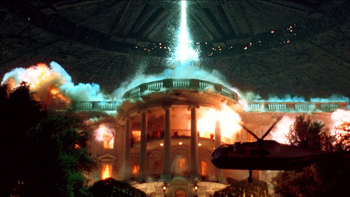 "Boy, the superintendent's gonna be pissed!"
"Keep running, men! This shot is for the trailer!"
— Kevin Murphy, Transformers Rifftrax
Advertisement:

The term Money-Making Shot refers to any really critical scene in a film (especially a scene that makes the trailer of the film). It is, essentially, the bit you bought your ticket for, so one could say that it's the point at which you get your "money's worth." Some films might have more than one Money-Making Shot.

See also Just Here for Godzilla, where the Money-Making Shot is all the audience comes for; Signature Scene, when a scene becomes this regardless of the creators' intentions; and Watch It for the Meme. Not to be confused with Shoot the Money.