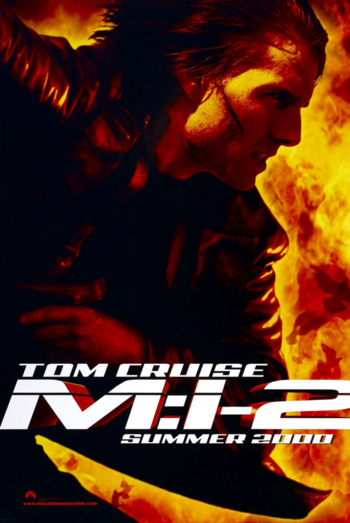 Expect the impossible again.
Swanbeck: So you think this will be difficult?
Ethan: Very.
Swanbeck: Well, Mr. Hunt, this is not 'Mission: Difficult', it's 'Mission: Impossible'. 'Difficult' should be a walk in the park for you.
Advertisement:

Ethan is snagged out of a vacation to track down rogue IMF agent Sean Ambrose (Dougray Scott) living in Sydney who has stolen a very dangerous virus and has malicious plans for it. He is sent to recruit Classy Cat-Burglar Nyah Nordoff-Hall (Thandiwe Newton) and ends up falling for her. That is made all the more complicated when he learns that she is an ex-girlfriend of the rogue agent and the agency wants her to infiltrate his group. Ethan has to put aside his personal feelings as he tries to stay one step ahead of his rival.

Directed by John Woo and it is plain to see, as this film is far more stylized and action-packed, with less cloak and dagger than the first film or the franchise as a whole.

There is no CGI used in this, only a rope. Also Tom Cruise did not have a stunt double in this scene.

There is no CGI used in this, only a rope. Also Tom Cruise did not have a stunt double in this scene.