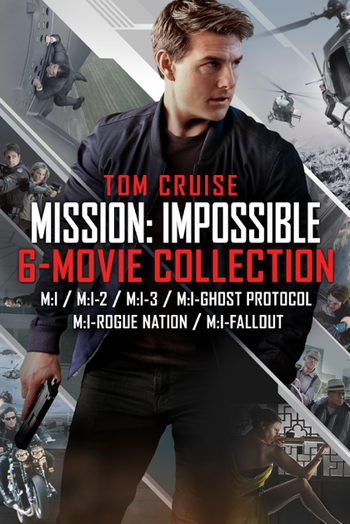 "Your mission, should you choose to accept it..."
Advertisement:

A series of action thriller films based on the spy TV series Mission: Impossible and produced by Paramount. The movies were made as continuations of the original, meaning they were not repeats of the same characters but mostly new characters working for the same agency.

Tom Cruise headlines each film as ace IMF agent Ethan Hunt and Ving Rhames plays Luther Stickell, Ethan's go-to guy for Mission Control and computer hacking. Each film outlines an Impossible Mission Collapse of varying kinds and it usually involves the heroes trying to fix the mess that has developed (often with violence, something the original show purposefully avoided).

Because of the higher action quotient and the dominant focus on Cruise rather than the entire team, there has been a sizable backlash from fans of the original series. Still, the films have been embraced by general audiences and elements unique to them alone have become embedded in modern popular culture. They all have different themes and tones, too; they don't simply use a Reset Button and each film isn't mere Sequel Escalation (except for Ethan's stunts, which Cruise insists on performing himself. They tend to get more elaborate/risky with each installment).

This series is also the Trope Namer for the famous "Mission: Impossible" Cable Drop.

"This message will self-destruct in five seconds."