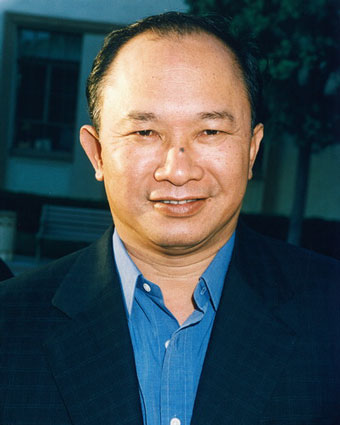 Woo's Hong Kong movies (with focus on Heroic Bloodshed) are, in no particular order:

Woo eventually ended up in Hollywood, where he directed the following films:

Woo left Hollywood and returned to Chinese cinema in 2008 by directing Red Cliff, a big budget two-part film inspired by a famous battle in Romance of the Three Kingdoms, and the wuxia movies Reign of Assassins and the two-part movie The Crossing. He has recently returned to the genre that made him famous with 2017's Manhunt.

Woo also has a number of production credits to his name, having co-produced The Replacement Killers, Chow Yun-fat's first major Hollywood movie, which features many of the thematic elements of his other films. In addition, Woo helped produce the video game Stranglehold, a sequel to Hard-Boiled which pits Inspector Tequila against the father of the Big Bad from the film. He additionally became known on the Anime scene as the producer of Appleseed Ex Machina.