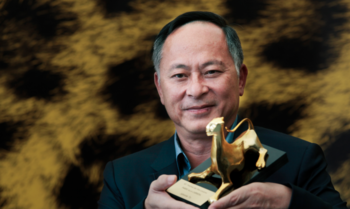 "Thanks for the paperweight, but I already have 17 of these at home." note  Johnnie To receiving the International Film Festival and Awards Macau (IFFA Macau) Award in December 2016 .
Advertisement:

Johnnie To Kei-fung (杜琪峯, born 22 April 1955 in Hong Kong) is a director and producer with an intensely profilic output in films, best known for crime and gangster movies, many which earned him international acclaim.

Starting his career as early as age 17, To had an interest in cinema when working as messenger for Hong Kong's TVB studios. His first cinematic release, 1980s' The Enigmatic Case which he directed at age 25, paves way for To's career move into making movies, but it wasn't until a decade later with 1990's A Moment of Romance (starring Andy Lau) and All About Ah Long (starring Chow Yun-fat) makes him a household name in Asia.

Establishing his own studios, Milkyway Image (with frequent collaborator Wai Ka-Fai), Johnnie To's films has made regular appearances in film festivals representing Hong Kong or Asia, with a surprisingly huge cult following in the West, his fans including director Quentin Tarantino. No, really

Notable Films from this Director: