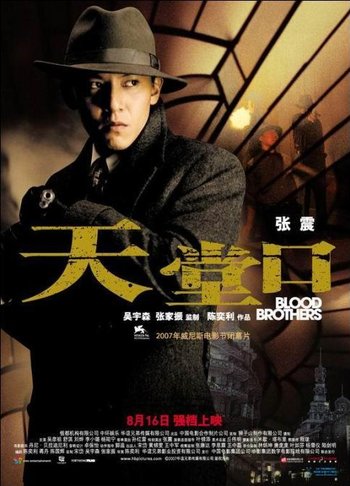 "The Entrance to Heaven closes early tonight. Everybody get out!"
Advertisement:

Blood Brothers is a 2007 film produced by John Woo, starring Daniel Wu, Liu Ye and Tony Yang as the titular trio, a band of sworn brothers living in 1930s-era rural China, who decides to travel to Shanghai for a better life.

Ah Fung (Daniel Wu), Hsiao-kang (Liu Ye) and Hsiao-hu (Tony Yang) are sworn brothers and close friends who grew up together, and works as laborers in rural China hoping to make it big in Shanghai, the city of their dreams. But upon their arrival, they discover the glamorous city of Shanghai turns out to be a haven for criminal activity and ruled by the triads, and the only way for them to make it big is to join the mob, firstly as gunrunners, and later on as killers. Worse of all, getting dragged into a dangerous love triangle involving a singer who is a mob leader's mistress (Shu Qi) threatens their brotherhood, which can only end in bloodshed. Given that John Woo is the producer, that's not really a surprise.

Blood Brothers is Alexi Tan's first feature film, although according to Tan he only serves as a director in charge of filming sequence, most of the film is a combination of the work of collaborators, writers and producers, with John Woo contributing majority of the ideas for the film. Much of Tan's influence for the film are inspired directly by Sergio Leone and Sam Peckinpah, the same people who inspired Woo.