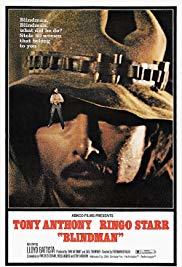 He's a man with no eyes. With only one thing on his mind... 50 women.
Advertisement:

Blindman is a cowboy who cannot see, but navigates with the help of his horse and is a master of gunfighting. He's tasked to deliver 50 mail-order brides to a mining town, but is double-crossed by his employer. He gave the brides to a group of bandits, and Blindman must go to rescue them. While doing so, he encounters a plot to ransom a Mexican general.