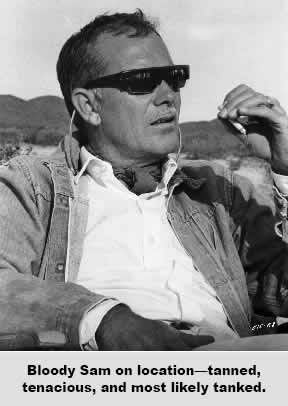 "Well, killing a man isn't clean and quick and simple. It's bloody and awful. And maybe if enough people come to realize that shooting somebody isn't just fun and games, maybe we'll get somewhere."
Advertisement:

David Samuel "Sam" Peckinpah (February 21, 1925 – December 28, 1984) was a director of manly movies. An eccentric substance-abuser who was notorious for his gruff demeanor and rocky relationships with women, he created a number of films that perfectly reflect his own personality: violent, nihilistic and cynical. Some of them stand as modern classics.

Peckinpah specialized in Westerns, a genre that had personal resonance for him, since he was born and raised in Fresno, California, and both of his parents were descended from prominent pioneer families. He spent much of his youth on a large ranch owned by his maternal grandfather, and learned first-hand about cowboys and frontier life.

After a stint in the Marines, he attended college, then moved to Hollywood. After some early behind-the-scenes film work, he made his name in television, writing episodes of Gunsmoke, Have Gun – Will Travel and some other Western shows. A Peckinpah script originally rejected from Gunsmoke became the basis for The Rifleman, and he did some writing and directing for it during its first season. He created the series The Westerner in 1960, but it only lasted 13 episodes. He made his feature film directorial debut the next year with The Deadly Companions, featuring Westerner star Brian Keith. The Wild Bunch kicked his career into high gear in 1969, but his irascible personality and personal vices led it to sputter out by the end of The '70s. He made a few steps toward a comeback in The '80s, directing The Osterman Weekend and, oddly, two music videos for Julian Lennon, before passing away from heart failure in 1984.