Film / The Ballad of Cable Hogue 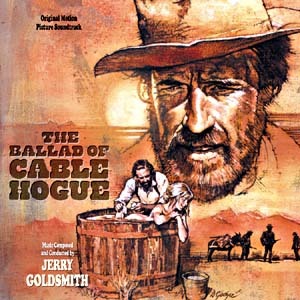 "Laugh at me? Laugh at old Cable Hogue, huh?"
Advertisement:

The Ballad of Cable Hogue is a 1970 Western Dramedy directed by Sam Peckinpah.

Cable Hogue (Jason Robards) is a desert-dwelling Hobo in the turn of the century Old West. As he hunts for his dinner, he's ambushed by Taggart (L.Q. Jones) and Bowen (Strother Martin), his former partners. They steal all his water and leave him for dead in the barren wasteland, mocking his situation as they ride away.

Driven to desperation, Hogue digs up the desert sand and unexpectedly finds water. He then goes to a nearby town and secures the funding to build an outpost for a busy stagecoach line at the watering hole he now calls Cable Springs. He also strikes up friendships with sassy prostitute Hildy (Stella Stevens) and perverted preacher Joshua (David Warner).

The stagecoach business is just a front, though. Hogue knows that one day Taggart and Bowen are bound to pass through. And when they do, there'll be hell to pay...