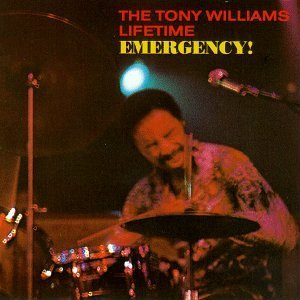 "And here I was, being exposed to where jazz would be in 100 years' time. Look at the personnel — a 23 year-old drummer who creates a kind of continuous thunder that ebbs and flows, not so much a rhythm, more as if he’s holding four conversations with himself simultaneously. John McLaughlin on guitar, playing this psychedelically painted Fender Jaguar through a series of malfunctioning foot pedals. And the real alien who’s dropped through from the future is their blind Hammond organist Larry Young. No need for a bass player, as Young played the pedals with his feet, and with his hands made music that sounded like someone shoving a screwdriver into a flying saucer engine, or something flying through a wide-mile cloud of swarf."
Andy Partridge, Word magazine.
Advertisement:

Emergency! was the 1969 debut of The Tony Williams Lifetime, an early jazz-rock group fronted by longtime Miles Davis drummer Tony Williams. The Lifetime at this stage was a Power Trio featuring guitarist John McLaughlin and organist Larry Young. As with much early Jazz Fusion, Emergency! received mostly negative reviews from the jazz press upon release, though Robert Christgau was an admirer

; he gave this album an A, and compared the follow-up Turn It Over it to a less "stupid" Led Zeppelin. But, again like much early fusion jazz, the album is now Vindicated by History and regularly receives perfect scores in retrospective reviews.

Incidentally, one major aspect of the album's sound, namely its rather distorted sound, was more or less a case of Throw It In: the engineer who recorded the album was used to recording acoustic jazz and didn't know what to do with electric instruments, but the band decided they liked the sound and opted not to re-record it. (Modern listeners used to the Loudness War, however, may wonder what the fuss was about, as the album's dynamics are at least fully intact, and the album isn't particularly distorted by modern standards. However, to audiences in 1969, the album's sound was a shock.)