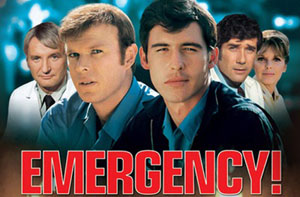 Emergency! is the first TV show to show the lives of paramedics. This was a very well-done and medically accurate show which inspired countless children to want to be in Squad 51, and supposedly many communities to get their own paramedics. An hour-long drama, it had elements of comedy, drama, angst, and many other things in its episodes, and though it had a shorter run, could be said to be a domestic version of one of the best shows ever in the field, M*A*S*H. It was also responsible for popularizing nationwide the concept of paramedics. One technical advisor to the show

went on to overhaul another EMS system

The origin of the show was when TV producer Robert A. Cinader came to Los Angeles to look into creating a standard Medical Drama. Once there, he learned of the paramedic program, which was just getting started, and realized it was a dynamite idea to create a show based around these brave special firefighters rushing about rescuing people. Executive producer Jack Webb of Dragnet fame added his trademark strict attention to accuracy, the Los Angeles County Fire Department threw in its complete support for the production, and the first and most famous live-action Rescue TV show was born.

Even today, the show inspires many, many people to become Firefighter-EMTs and paramedics. It's a fair bet that any EMT/paramedic in the U.S. and Canada who started work between 1979 and 1995 was inspired by this show either in its first run or reruns. More broadly, the series is popularly credited in encouraging the widespread adoption of the emergency service across North America, which could be credited in eventually saving a untold number of people in distress with the service established in their area.

Followed/accompanied — as was virtually standard practice in the 1970s — by a comic book series and an animated Saturday morning series, Emergency +4, in which the Emergency paramedics were saddled with the requisite four kids and dog. After the live-action show ended, six made-for-TV movies aired in the late '70s; Gage and DeSoto were the only regular characters to appear in all six films.

At the end of 2016, the show had ended its run on MeTV, an over-the-air network that is usually on the .2 signal of a network affiliate (Example: KAKE Ch. 10.2 in Wichita, Kansas.), and at the beginning of 2017, it is now playing on Cozi TV. It's also available on Netflix and Hulu, as well as NBC's classic television webpage. The entire series has also been released on DVD in season anthologies (with the made-for-TV movies comprising a seventh collection "The Final Rescues"); the pilot movie is included in the Season 1 collection.

In April of 2022, FETV began showing back to back episodes seven nights a week.