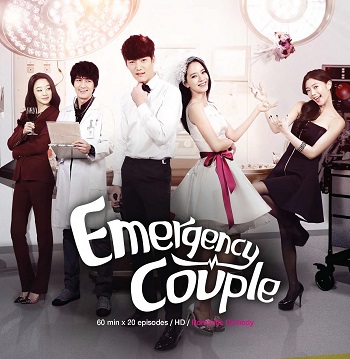 Emergency Couple (응급남녀) is a 2014 Korean Drama about a divorced couple that meet again as student doctors. Jin Hee is a pretty young woman working as a dietician in Seoul. She gets married to medical student Chang-min despite his mother Yang-ja's violent opposition (the series begins with Jin Hee and Chang-min running away from goons sent by his mother to stop the wedding). Chang-min's family is full of doctors, but after Yang-ja cuts him off he has to drop out of med school and work as a pharmaceutical salesman. The marriage quickly deteriorates under family and money pressures, and after a violent argument in which they wreck each other's stuff, they break up for good.

Cut forward six years, and Chang-min, who got back in his family's good graces after divorcing Jin Hee, has completed med school and started his internship. As for Jin Hee, she has a new job, which doesn't prevent her from getting drunk out of her mind the night before she's supposed to go to work. In fact, she gets so drunk that she gets alcohol poisoning and is taken to the hospital. The hospital where Chang-min is starting his internship. And what makes it even better is that Jin Hee's new job is—wait for it—as a doctor, since in the six years since her divorce she went to medical school too. And her new internship is at that same hospital, along with her ex-husband.

Emergency Couple ran for 21 episodes. Other characters include Ah-reum, a very pretty female internist that Chang-min's mother wants him to marry; Gook Cheon-soo, the male chief of the ER, and a very tough taskmaster who is nicknamed "The Devil"; and Ji-hye, a female surgeon who has a past with Cheon-soo.