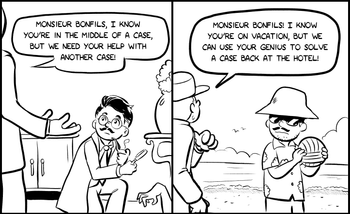 "Monsieur Bonfils, I know you're the page image, but we need your help with a case in the examples."
"'Busman's holiday' is an expression which refers to when people do the same thing on vacation that they do in their everyday lives, such as plumbers who visit the Museum of Sinks, or villains who disguise themselves even on their days off."
— Lemony Snicket, The Penultimate Peril
Advertisement:

A Busman's Holiday is a vacation spent doing things similar to one's normal work. The phrase was first recorded in 1893 in the UK. The idea is that a busman, to go off on a vacation, would take an excursion by bus, thereby engaging in a similar activity to his ordinary work.

A detective, for example, goes on holiday. While they are on that holiday, a murder will take place in the vicinity and they will be forced to solve that case. If the killer knows the detective is there, they're either very stupid, very arrogant, or are plotting something big. Or something bigger than it looks.

This trope is much more likely than not to be lampshaded. Often, upon finishing the impromptu adventure, the hero insists on returning back to work immediately, stating they need a vacation from their ruined vacation.

In anime, Hot Springs Episodes and Beach Episodes often turn out to be busman's holidays, especially if the show in question happens to be an action show, in which case a villain or villains will show up to ruin the heroes' fun. If a character doesn't do the job as a calling, but finds trouble anyway, they're probably a Mystery Magnet.

The simplest explanation for this phenomenon is the belief that a regular vacation would be boring. If the main character is fairly low in their job's hierarchy (i.e. a beat cop), it can also nicely justify the utter lack of backup and why a rookie is handling an adventure that should properly go to someone way above their pay grade.

Compare Pulled from Your Day Off when the character gets called into their actual job from their vacation. See also Reassignment Backfire.

Natalie even concludes at the end of the episode that fate makes Monk go to these places JUST SO he will be there to solve the murders...