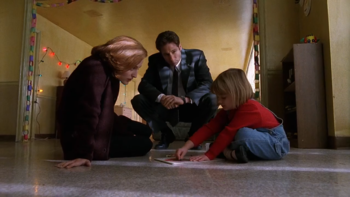 "No matter how much you love this little girl, she's a miracle that was never meant to be, Scully."
Written by Vince Gilligan, John Shiban & Frank Spotnitz
Directed by Kim Manners
Scully: I don't understand. Why create a false record?
Mulder: Because there are no true records. Emily didn't come into this world through any system that keeps them.
Scully: How did she come into this world?
Mulder: Have you asked yourself that?

Mulder investigates the past of Emily, the girl Scully found in the previous episode who is Scully's biological daughter.

"Who are the men who would create a life whose only hope was to die?"