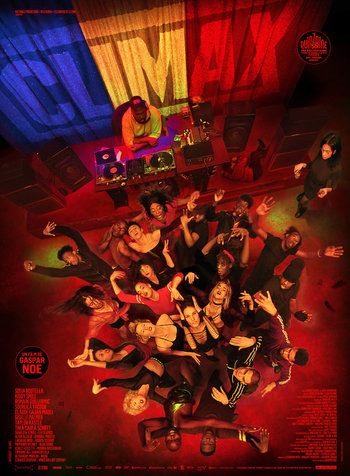 Climax is a 2018 Frenchnote "and proud of it" psychological horror dance film directed, written and co-edited by Gaspar Noé.

In 1996, a large group of young French dancers is recruited by a mysterious company to star in a new production that will take modern French dance to the United States and beyond. After three days rehearsing a routine in a remote dance studio, the group celebrate by having a party involving dancing, drugs, and a large bowl of sangria.

However, the dancers realize that someone's spiked the sangria, and when it kicks in, their attempts to find out who's responsible are slowly overpowered by the combination of their rapid descent into insanity with the hypnotic rhythms of the music, turning the celebration into a hallucinatory nightmare.

While Climax carries a number of Noé staples, such as its vibrant color, intense story and oppressive atmosphere, the film is unique for its unusual production by his standards. It was conceived and pre-produced in only four weeks, shot in only 15 days, and largely consists of unrehearsed on-the-spot improvisation by the cast (composed almost entirely of real-life dancers with no acting experience).