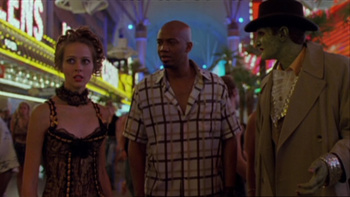 Connor fights a vampire in an alley. Unknown to Connor, Angel watches him from a nearby rooftop. Unknown to both of them, Cordelia watches from her higher plane. She says Angel need not worry about Connor, but should worry about getting her back to Earth. Angel drops a flower pot in the path of the vampire Connor is fighting, causing it to stop for a moment so Connor can catch up to it and stake it. Connor looks up, but sees no one.

Fred and Gunn emerge from the shadows behind Angel. They have been watching him. Gunn suggests Angel should talk to Connor, "if that's what you want." Fred complains that Angel seems distracted. Angel asks them to follow him on a "retreat," which turns out to mean driving to Las Vegas.

Angel is driving as the three enter the Las Vegas strip. Fred suggests they go see Lorne, who could read Angel's aura and help him find his path. Angel mentions that the place has changed a great deal. It turns out he has been to Las Vegas many times and once knew Bugsy Siegel.

The three attend one of Lorne's performances at the Tropicana. Lorne is backed up on stage by the Lornettes, a troupe of women dressed as green-skinned, horned demons. Lorne descends from the stage while singing to get closer to the audience. Fred predicts he will plotz when he sees the AI team. Instead he walks right by, apparently without noticing them.

Lorne shares his microphone with a young woman named Vivian who has just been accepted at a culinary school in Paris.

After the performance, Fred, Gunn and Angel go backstage with a crowd of other people, hoping to see Lorne. Lorne appears, but again pretends not to know the AI team members. He proceeds to his dressing room flanked by two bouncers, one of whom enters the room with him.

Lee DeMarco, who owns the casino, comes in. Lorne does not wish to talk. The bouncer punches Lorne in the stomach. Lee threatens to "pink slip another girl from your act" if Lorne does not cooperate. The bouncer shows Lorne a seating chart from the Tropicana's theater. Lorne points out three members of that night's audience who have brilliant futures awaiting them. One of them is Vivian, the student chef, who will work at three five-star restaurants in the next decade. Though Lee appears skeptical, Lorne insists "that's all." Lee departs. Using a remote control, he causes bars to lower into place, imprisoning Lorne in his dressing room.

Wesley is at his office, talking with Lilah on a telephone, and discussing a possible rendezvous later that evening.

Fred and Gunn are sitting at a blackjack table while Angel watches. The three discuss Lorne's behavior. A Lornette approaches Vivian, the student chef who spoke with Lorne earlier, and gives her a chip. The chip, which sparkles as soon as it lands in Vivian's hand, entitles Vivian to play a special game called "Spin to Win" where the prize is a million dollars. The Lornette points out a door and tells Vivian to go through it and present her chip to the man who is guarding it. Vivian gets up.

Angel approaches the Lornette. He asks her to deliver a note to Lorne. She refuses at first, then relents.

Angel wanders past a row of slot machines, where people are playing as if in a stupor. In her higher realm, Cordelia observes this. She believes Angel notices something wrong, but wonders why he doesn't notice that she, Cordelia, also needs help.

While Gunn and Fred discuss Angel at the blackjack table, two bouncers grab Angel and hustle him away. Gunn and Fred, not knowing what happened to Angel, go looking for Lorne.

Outside the casino, the two bouncers beat up Angel. Angel puts on his vampire face and overcomes both of them. On his way back to the casino, he spots Vivian, the student chef, who seems to be sleepwalking. She walks in front of an automobile. Angel rescues her. She says she needs quarters.

Gunn and Fred find Lorne's dressing room. Seeing the security guards, they feel certain something is not right. Fred dresses up as a Lornette and talks her way past the guards.

Inside, Lorne at first attacks with an empty whiskey bottle, but recognizing Fred, he embraces her. He says he needs to be rescued. His reference to Fluffy, in an earlier telephone conversation with Fred, was a coded plea for help. He explains that Lee DeMarco, once a mediocre stage magician, managed to find some real magic and is using it, with Lorne's unwilling help, to destroy people's lives for his own profit.

Angel forces his way into the same room Vivian entered earlier that night. "Spin to Win" turns out to be a roulette-style game. The croupier asks Angel to leave, but Lee DeMarco enters, tosses Angel a chip, and invites him to play. Angel catches the chip and throws it on the table, saying he is not there for games, but the chip sparkles, which means Angel is in the game though he does not know it. When the house wins, Angel's face goes slack. He seems to have lost his spirit, like Vivian and the slot machine players he saw earlier that night. Lee hands him a cup full of quarters. Angel turns to go play the slots.

Fred runs out of Lorne's dressing room screaming. She tells the guards that Lorne attacked her and then escaped. When the guards go inside the dressing room to investigate, Lorne slips out. Fred then ties the door shut and finds Gunn. The three run down a corridor looking for a way out of the casino.

Lee DeMarco, in his office, receives a report on Angel. He seems impressed and surprised that Angel is a vampire with a soul and is destined to play a part in an apocalypse. He orders his lieutenant to contact their brokers and to telephone "that weirdo law firm in LA," Wolfram & Hart.

Fred, Gunn and Lorne hurry through the casino's main floor. Gunn finds Angel and asks him to attack the casino guards whom they expect will pursue them. Angel, who is playing a slot machine, responds in a non-committal way. Gunn does not seem to understand that Angel is not his usual self.

Gunn, Fred and Lorne escape to the Las Vegas strip. They try to elude the casino guards by hiding in the crowd. On the way, Lorne explains Lee DeMarco's game. DeMarco forces Lorne to find people in the audience who have a brilliant future ahead of them, then he offers these people a chip and a chance to play "Spin to Win," as they did with Vivian. The person's destiny is imprinted on the chip. The game is rigged never to pay off, so that the person loses his chip and with it his destiny. These destinies are sold on "an extremely black market". The person who lost his destiny then has no purpose or direction and never accomplishes anything. Some of them never get out of the casino, wasting their life playing slot machines.

Gunn now realizes what has happened to Angel. At this moment, three casino guards appear. Lorne, seeing a group of street musicians using a public address system, grabs their microphone and sings loudly at a high pitch. Hundreds of light bulbs shatter and people flee holding their ears. In the confusion, the three escape.

Gunn asks Lorne why he didn't simply refuse to cooperate in DeMarco's scheme. Lorne says DeMarco shot a girl in the head when he refused, and threatened to do it again if Lorne ever failed to cooperate.

Gunn, Fred and Lorne drive up to the Tropicana in Angel's convertible. Gunn goes inside to rescue Angel. Gunn finds Angel, who recognizes him but does not seem to understand or care about the situation. DeMarco's lieutenant walks through, leading security guards with Lorne and Fred in tow. They take Gunn as well, leaving Angel to play the slots.

Fred, Gunn and Lorne are taken to Lee DeMarco. DeMarco intends to kill Fred and Gunn.

In her higher realm, Cordelia is frustrated. She has power, but is not allowed to act. Seeing a way forward, she influences Angel's slot machine so that Angel wins $300,000 and a car.

DeMarco orders his guards to take Fred and Gunn into the desert and shoot them. His lieutenant informs him that Angel has won a jackpot. DeMarco orders that Angel be brought to him. DeMarco is soon convinced that Angel did not cheat. He orders that Angel be paid his winnings in quarters, and repeats the order to kill Fred and Gunn. Fred and Gunn resist. As the guards rough them up, Angel becomes angry, puts on his vampire face, and attacks the guards. In the melee, Lorne takes a nightstick from a fallen security guard and smashes a crystal ball that is the source of DeMarco's magic. At once, all the transfers of destiny are undone. Angel, among others, is himself once again.

The Fang Gang arrive back at the Hyperion Hotel. Angel is perplexed as to how he won the jackpot and why he was motivated to fight while in DeMarco's office. Entering the lobby, they see Cordelia, who does not remember them.