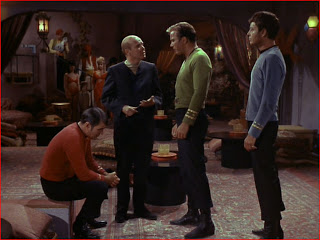 Hengist (John Fiedler) discusses the murders with our heroes.
Advertisement:

After Scotty is granted therapeutic leave after a head injury, Kirk and Bones take him to Argelius II to visit a nightclub that has a sort of Arabian Nights theme going on. Scotty seems to be recovering nicely and chats up a dancing girl named Kara. Kirk and Bones decide to leave Scotty alone with his new friend, but stop when they hear a screech from an alley. Kara is dead and Scotty is standing over her as if in a trance.

An inquest is held. Administer Hengist calls for Scotty's immediate arrest. Scotty can't remember a thing. When Yeoman Tarkis, beamed down from the Enterprise with a psychotricorder to recover Scotty's memory, turns up dead and Scotty unconscious nearby, things look bad.

Jaris, the Argelian leader, introduces them to his empathic wife, Sybo, who will use her Psychic Powers to deduce who the killer is. Spock notes that although psychic powers have been confirmed to exist in some Argelians, it's not the kind of thing that would meet the standard of evidence in a Federation courtnote This comes up again in "Turnabout Intruder": evidence obtained by ESP is considered hearsay. and suggests they take the matter out of the Argelians' hands. Kirk, however, states that they're obliged to let the local authorities proceed in their own way.

Sybo goes into her trance and states she senses a great feeling of anger and hatred towards women and a desire to feed on fear. She mentions the names "Kesla, Boratis, Redjac" and states that he has a hunger that will never die. But Sybo will. When the lights come back on, Sybo has a knife in her back and Scotty has blood on his hands.

Scotty, Jaris, Hengist and two other persons of interest (Kara's father Tark and her ex-boyfriend Morla) are beamed aboard the Enterprise with Kirk and Bones. Scotty is further questioned, using the ship's computer as a lie detector. The conclusion is that Scotty does not know if he committed the murders. He remembers black outs, coldness and a stench like a slaughterhouse. In the face of Hengist's insistence that Scotty is obviously guilty, Kirk suggests that they attempt to learn what they might from Sybo's last words. A search of the computer records for the name "Redjac" takes the investigation in a completely unexpected direction.

Tropes in the Fold: