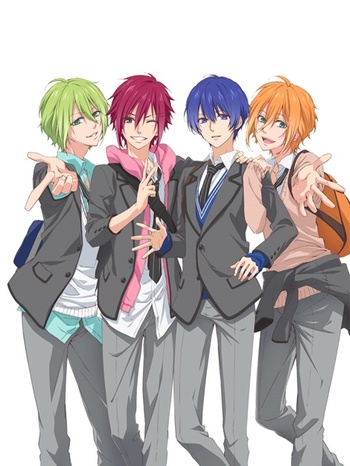 One kiss to the end of the galaxy!
After their debut at UniverseFES, the male idol group Marginal #4 is slowly but surely building up their name to be one of the great idol groups! But what do the boys of Pythagoras Productions do in between their idol activities? And what kind of misadventures do they get into?
Advertisement:

Marginal #4: Kiss Kara Tsukuru Big Bang (Marginal #4: A Big Bang Created From a Kiss) is a 2017 12-Episode Band Toon produced by JC Staff, adapting the Pythagoras Productions characters from the Marginal #4 series by Rejet. It aired in the Winter 2017 Anime season.

The series received an international release via Crunchyroll streaming.