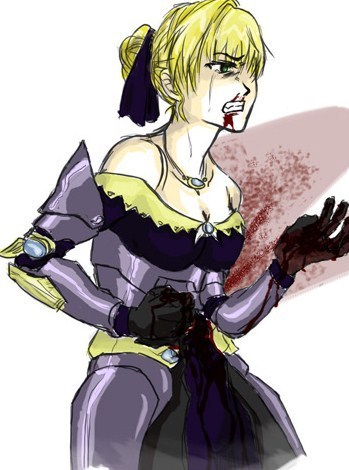 Poor Olivie took the title too seriously. note The context behind this picture? Not so amusing.
Advertisement:

Takamachi Nanoha is just your average nine year old girl thrust into an extraordinary situation, or so she thought.

After bringing Yunno home for the first time, the young mage-turned-ferret remarks to her how he felt strong magical power from Nanoha's mother, which would explain the incredible magical potential he felt from Nanoha. Nanoha doesn't believe him.

At the same time, her mother can feel her daughter's magic awakening, and decides to reveal the truth when the time is right.

That time ends up being during a confrontation between Nanoha and Fate, where she decides to intervene, becoming Fate's new opponent. Fate is shocked at the strength of Nanoha's mother that she had to ask, "Who Are You??"

"Who am I, you ask?" The woman smirked as she looked at Fate with her red and golden eyes. "My name is Lina Takamachi. But I used to be known as Lina Inverse."
Advertisement:

is a Lyrical Nanoha AU Crossover where Nanoha is the daughter of Slayers protagonist Lina Inverse, who was dimensionally and temporally displaced after her possession by the Lord of Nightmares during the battle against Hellmaster. Written by Nanya of the Relationships Series fame, who has described the two as the queens of magical overkill, the story goes through the first two season of Nanoha before going on its own tangent, including incorporating plotlines and other characters from Slayers.

The Story Arcs of the Fan Fic so far:

Note: The spoilered content is for material that is on the Nanoha fanfic thread on Animesuki's forums

It should be noted that the Author no longer posts at Animesuki and the Anime Addventure currently has a bad bug keeping any new posts from showing up. You can find the newest parts at The Fanfiction Forum.

In addition, if any tropes are being renamed, please rename the trope to its proper usage instead of just deleting them.

After a long bout of silence, the story was officially declared a Dead Fic on March 5, 2021.

Tropes Found In Blood That Flows: