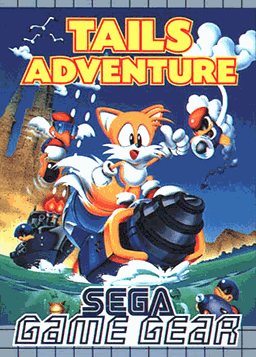 Tails Adventure, also known as Tails Adventures, is a Metroidvania game in the Sonic the Hedgehog franchise. It was released for the Sega Game Gear in 1995. It is one of three spinoff games that Tails received, the other two being Tails' Skypatrol, which was also on the Game Gear, and Tails and the Music Maker, which was for the Sega Edutainment System, the Sega Pico.

While taking a nap outside his house, Tails is woken by an explosion. The Battle Kukku Army has invaded the island in order to find the Chaos Emeralds, and it's up to Tails to stop them.

This title is different from other games in the Sonic series in that the emphasis is on visiting and revisiting different stages in a similar vein to Clash at Demonhead. Also, unlike previous titles, Tails actually reaps benefits from collecting just one Chaos Emerald (an increase in HP and Flight stamina).

The Japanese manual says this game takes place on Cocoa Island before Tails first met Sonic, while the Western manual says it takes place after Sonic and Tails' last adventure and Tails is on vacation on Tails Island.

It has a comic book tie-in in Sonic Universe, though it took a few liberties with the plot (such as it is). The Battle Kukku Army, referred to as the Battle Bird Armada, has since taken on a role as one of the major villain groups in Archie's Sonic series.

Not to be confused with Sonic Adventure (although the game is an unlockable bonus in the GameCube re-release).