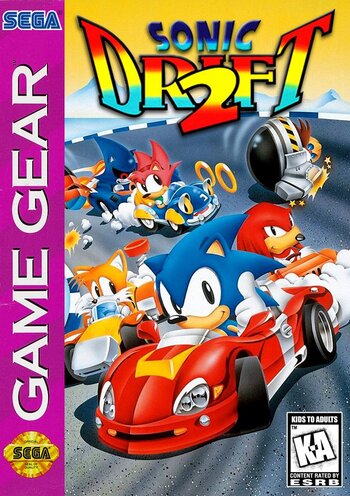 "Why the hell am I in a car?"
—Sonic's thoughts on Drift in Sonic Shorts, Vol. 2
Advertisement:

The Sonic Drift duology is a series of Spin-Off drift-racing games released for the Sega Game Gear, starring true blue and company.

The first entry, released in 1994, was a very basic kart racer, with four playable stars: Sonic, Tails, Amy (the first time she was ever playable) and Dr. Eggman (also the first time he was ever playable). Rings could be collected to activate each character's special attack (speed boost, jump, ect.). Gameplay wise, it is more or less Sega's answer to Super Mario Kart (with a bit of Pole Position thrown into the mix) — it even has a map on the screen a la the original outing (but inexplicably put on the top of it rather than the bottom). Prior to being ported to Sonic Mega Collection Plus and Sonic Adventure DX, this game never saw the light of day in the U.S. or Europe.

However, the following year it did receive a follow-up, the aptly named Sonic Drift 2, which did make it overseas (and curiously retained the numeral in the U.S.). This game expanded upon the original by adding more playable characters, tracks, course variety, and smarter A.I. (perhaps too smart).