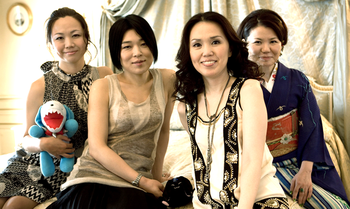 The four women who make up the manga group CLAMP (Ohkawa Nanase, the scriptwriter; Mokona Apapa, the lead artist; Igarashi Satsuki, the layout designer; and Nekoi Tsubaki, the character artist) are to manga (and manga turned into anime) what Megumi Hayashibara is to voice acting. They began as doujinshi artists before breaking into the professional manga scene in 1989 with RG Veda. The original doujin circle was actually made up of ten members (one of whom was a guy), but six of them left (one in 1990, two in 1992, and three in 1993), resulting in the four-woman team we know today. That Other Wiki has a little more information on their contributions and accomplishments since in CLAMP's article

Since RG Veda, nearly all of their work has been animated, a list which includes many of the staple series of anime.

A theme that runs through CLAMP's works is that love transcends everything, particularly that pesky little thing called gender. Note that this is not a "love conquers all" kind of thing, as gender/age/being a robot/being a ruthless assassin/etc can be insurmountable barriers to having a functional relationship. No barrier can stop people from falling in love but it may very well prevent that love from reaching a happy resolution. (See the relationship between Tomoyo and Sakura in Cardcaptor Sakura, or the one between Sakurazuka Seishirou and Sumeragi Subaru in Tokyo Babylon and X, or between Kazuhiko and Suu (or Ora) in Clover as prime examples.)

Their manga work is characterized by a highly-detailed Shoujo art style, though for budget reasons the designs are often simplified for animation. Their style underwent a noticeable change in the late 1990s when Mokona starting ceding more design responsibility to Igarashi and Nekoi. Nekoi's distinctive character designs are responsible for the "noodle people" description common in fandom. CLAMP also errs on the shojo side thematically (despite being published in an unusually wide range of magazines, including Shounen and Seinen), and thus are very prone to drama and painful Hard Truth Aesop. Their work also runs the spectrum with some being extraordinarily cutesy and lighthearted, others being horrifically gory and violent, and others still being a mix of the two or everything in between. Being former doujinka, their work is also notable for a deliberately high degree of fanservice. Aside from that, CLAMP loves inserting alternate versions of previous characters into other works, a concept somewhat connected to the fact that their works take place in a large, interconnected multiverse.

The question of "which of their works is Most Important" can be difficult and contentious; virtually all of their works from The '90s and the turn of the millenium have very devoted fans. The ones with the best arguments, however, are Magic Knight Rayearth, Cardcaptor Sakura, X/1999 and ×××HOLiC. Rayearth was one of the first Magical Girl Warrior stories to really escape the shadow of Sailor Moon, mostly by way of injecting some Super Robot and High Fantasy elements into the proceedings, and its influence is still felt to some degree today. Much more influential (and for many, the "best" candidate for importance) is Sakura, which became the final Trope Codifier of Magical Girl anime in the 90s; virtually everything produced in that genre in its wake owes something to it.

X is the most contentious, in that it was on the road to being massively influential - its movie version famously won over Roger Ebert - but its indefinite hiatus on a cliffhanger has more or less obliterated any affection it once inspired. When it was running, however, it was a massively influential work for its blend of Urban Fantasy and the apocalypse. Finally, xxxHolic... more or less defies classification. It's this strangeness and flexibility, however, that has left its mark on wider culture.

A quick note about the members of CLAMP: In July of 2004, they all changed their pen names slightly. Mokona Apapa became simply Mokona, Ohkawa Nanase became Ohkawa Ageha, Nekoi Mikku became Nekoi Tsubaki. Igarashi Satsuki simply switched her family name into hiragana, and her given name into kanji. Nekoi and Mokona had been wanting to change their pen names for awhile; Ohkawa and Igarashi just went along for the hell of it. Ohkawa has since reverted to Ohkawa Nanase for attributions. At least three of them have used their names (partially or entirely) for characters in series: Satsuki as Yatouji Satsuki in X, Nekoi as Nekoi Yuzuriha in X, and Mokona as Mokona in Magic Knight Rayearth, Tsubasa -RESERVoir CHRoNiCLE-, and ×××HOLiC.

Some of their works:

Tropes common across most of their works: