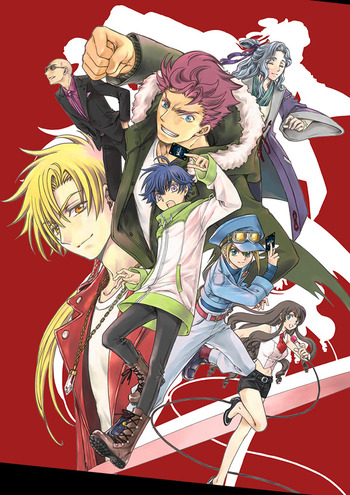 Welcome... to the world of the New Vanguard.
Yu-yu: "One day, I was brought to the Night Amusement Park where I got to know the members of Team Blackout... and also Vanguard!"
— Promotional video shown before the start of episode one

The fourth main series of the Cardfight!! Vanguard anime.

Yu-yu Kondo is a boy who can read the hearts of other people, but in exchange is unable to refuse requests. After getting roped into his sister's hobbies and unable to bear with it any longer, he runs away from home. He is then saved by Megumi Okura who invites Yu-yu to Night Amusement Park where Team Blackout resides with the fight tonight being Team Blackout's leader, Danji Momoyama, against the mysterious powerhouse fighter, Tohya Ebata. This encounter will draw Yu-yu to the world of Vanguard and showcase him the world and friends he had never seen before.

Unlike the previous series, overDress is not connected to the original series. It also utilizes character designs by CLAMP and has a shift in production from OLM Incorporated to Kinema Citrus, GIFTAnimation, and STUDIO JEMI. It also differs story-wise by focusing less on the game itself and more on the characters, not unlike the first season of G.

Tropes that apply to overDress: