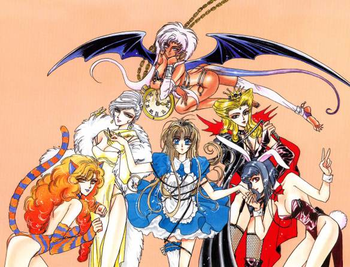 The next part involves her getting sucked into the looking glass. Similar craziness ensues.

And that was just the anime version. The manga version has even more adventures for her as Miyuki keeps dreaming one Homoerotic Dream after another.

Probably CLAMP's most titillating work ever, the manga was serialized in Newtype from 1993 to 1995 and compiled into a single volume. It was licensed in English by Tokyopop, and later by Viz Media after Tokyopop's closure in 2009. The manga was adapted to a two-episode OVA in 1995.

Miyuki-chan in Wonderland provides examples of the following tropes: