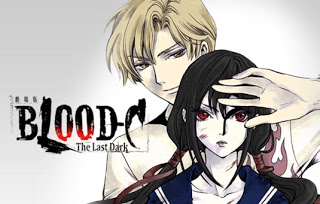 "A prize for the winner. A penalty for the loser"
—Saya Kisaragi
Advertisement:

Blood-C: The Last Dark is a movie sequel of the TV series which is produced and collaborated by Production I.G and CLAMP. It was released in June 2, 2012 and is licensed by Funimation, along with the TV series.

It continues where the TV series left off: Saya pursues her revenge against Fumito Nanahara, who is responsible for the events that took place in the Ukishima province. One year later, Fumito takes control of Tokyo by imposing the Youth Ordinance Bill (or "Youth Protection Act", if you will), which restricts the use of the internet and sets a curfew for minors. Upon arriving at Tokyo, Saya encounters a humanoid Elder Bairn in the subway, who then kidnaps a girl. Saya slays the Elder Bairn and saves the girl, whose name is Mana Hiiragi, a member of a resistance group called SIRRUT. Knowing who she is, SIRRUT request Saya to help them take down Fumito and his organization, Tower. With no other choice, Saya agrees to provide assistance and they prepared themselves for the final battle.

Be warned: spoilers from the TV series will be left unmarked if you haven't seen it.