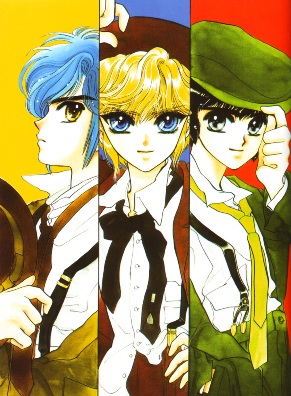 To protect and serve women all around, is CLAMP's detectives' noble goal.
Advertisement:

Clamp School Detectives is a shoujo manga series by CLAMP, which was serialized in Monthly Asuka from 1992 to 1993 and compiled into three volumes. It was later adapted into a 26 episode anime in 1997.

It tells the adventures of the Elementary School Student-board, solving cases and easing the life of all kinds of women. Aiding them are the Kindergarten Class President Utako and her best friend Nagisa, who are sorta smitten with them. However, their hardest case will be one regarding Nokoru's past...

It is connected to CLAMP's manga Man of Many Faces (a Prequel which stars Akira as the elusive thief 20 Faces) and Duklyon: CLAMP School Defenders (which happens at the same time and has guest appearances by the cast), while X1999 is also partially set in CLAMP School and serves technically as a Sequel.