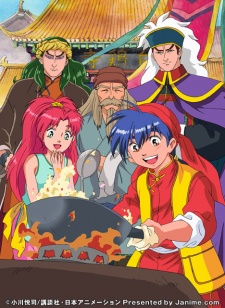 "We Chefs cook to bring happiness to the people!"
Advertisement:

Chūka Ichiban! (meaning "China's Number One") is a manga and anime (the latter known as Cooking Master Boy in anglophone countries) about a Chinese boy named Liu Mao Xing, who aspires to be a great chef like his mother. The story is set in a fictional Imperial China where cooking is being taken seriously. It is entirely possible to be banned from cooking just by losing a competition, even if your dish was of adequate quality. Chefs of varying degrees of proficiency are recognized and awarded by the Empire, and the most coveted title of all, the Supreme Master Chef title, is Mao's penultimate goal.

After passing the grueling and highly competitive Supreme Master Chef examinations, Mao gets qualified for the title and decides to travel across China in order to improve his cooking skills more. However, things take a dark turn as the Underground Cooking Society, an evil organization trying to take control of China through culinary proficiency, begins a search for seven magical cooking items. Now Mao has to get the items first before society lays a hand on them and eventually use them to control China.

The original manga by Etsushi Ogawa was serialized from 1995 to 1999 in Weekly Shonen Magazine. The first anime adaptation ran from April 1997 to September 1998, concluding at 52 episodes. A continuation, Shin Chūka Ichiban! debuted in October 2019, and looks to cover content that wasn't adapted in the first anime while being a more faithful adaptation to the manga. There is also a sequel of the original manga with the name Chūka Ichiban! Kiwami (which started its serialization in 2017), where the sequel now sends off Mao once again on a journey to find the truth behind the disappearance of his father since his childhood while dealing with new threats to the Chinese society.