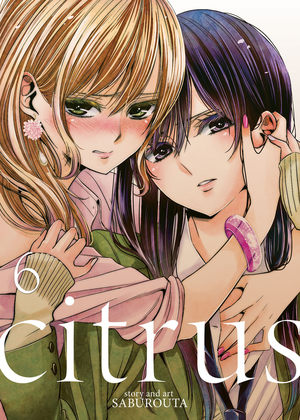 The pain of sisterly love and hate...
Advertisement:

Citrus is a yuri manga series by Saburouta that was serialized in the monthly yuri magazine Comic Yuri Hime from 2012 to 2018. The series is currently licensed by

When her single mother remarries, stylish Gyaru Girl Yuzu, who laments the fact that she has never had a boyfriend or even fallen in love, transfers to a new school. Determined to snag a boyfriend on her first day, she dresses as stylishly and sexy as she can. As she belatedly discovers, however, the school she's been transferred to is a strict, conservative, all-girls high school. On top of that, she almost immediately makes an enemy of the stoic, no-nonsense Student Council President, who punishes her numerous dress code violations by confiscating her cell phone in a strangely intimate fashion.

After this tense encounter with a girl who she just can't seem to get out of her head, Yuzu returns home, just in time to find out that with the new marriage also comes a new stepsister, who turns out to be none other than Mei Aihara, the very same girl she met earlier. Later that night, when Yuzu tries to get under her new sister's skin, Mei suddenly and unexpectedly steals her first kiss, leaving poor, confused Yuzu to wonder just what this all means...

An anime adaptation of the series aired from January 6 to March 24, 2018, and was simulcasted on Crunchyroll. Additionally, Funimation streamed the English dub. Watch it here

The manga concluded with its 41st chapter on August 18, 2018, with the announcement of a spinoff titled Citrus Plus, which started in December of the same year.