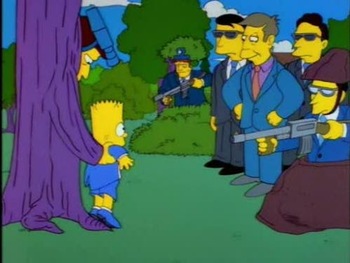 A sting operation organized to bust a student. Off school grounds. On a Sunday. Involving automatic weapons.
Advertisement:

You are a student at your local school. Once school lets out for the day and you're miles away from the school property, you get involved in a "misunderstanding". Perhaps you partake in a Zany Scheme, enact a Practical Joke, or you have to fight The Bully. When you return to school, you're shocked to learn that you're being punished for those offenses you committed off school grounds and outside of school hours.

Depending on the school, this can be Truth in Television. Some laws allow it, and certain schools (particularly those with recognizable uniforms, boarding schools, religious schools, and/or private schools) want to protect their reputations.

A Sub-Trope of Artistic License – Education, which includes any instance of school staff exerting authority they shouldn't have, whether it be on school grounds or outside of it. May overlap with Jurisdiction Friction. If student(s) are punished for the actions of a family member or an acquaintance, it could also overlap with I Will Punish Your Friend for Your Failure or Revenge by Proxy. Compare Absurdly Powerful Student Council, where the student leaders of the school have more power than they should.