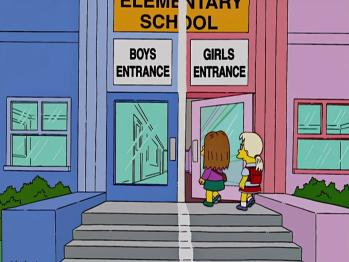 And non-binary students use the white stripe.
Every school is somewhat divided into different, smaller groups, as every student would naturally find their own niche eventually and people generally hang out with other people with similar interests and personalities. It's only natural for the student body to be split, and for cliques to form as a result. But in fictionland, sometimes this is taken to its natural extreme- not only is the school divided, but those divides decide everything in the school. The cliques don't mingle, and when they do, it's to antagonize each other, with each group seeing all the others in a negative light.
Advertisement:

The most common forms of division are:

Of course, any division reason may apply, as long as the school is divided to such an extreme that there are at least two separate, co-existing cultures that are at odds with each other. One group is far more likely to be treated better than the others, so this allows the Alpha Bitch, Jerk Jock, Big Man on Campus, and Absurdly Powerful Student Council to thrive, regardless of why the school is divided. It may also be enforced by the school's faculty, all the way up to a strict Dean Bitterman, who considers any attempt to shake up this system as rule-breaking and chaos. It can also be self-perpetuating, with the students themselves encouraging this divide, or rule-enforced, where this division is an actual school policy.

And rest assured; things will be shaken up. It's almost a guarantee that this system will be threatened somehow, either by the quirky protagonist breaking down the barriers, a major conflict between groups that force a solution to be found, or the divide's main-enforcer being thrown out of power. This isn't easy, and there's bound to be a lot of major opposition, but the heroes will invariably be on the side of fixing the divide and allowing students to be treated equally. Even if the system doesn't crumble entirely, the protagonist will often try and make things less strict.

Compare Urban Segregation and Aggressive Categorism, Fantastic Caste System, and Grouped for Your Convenience, all of which capture similar ideas about division and judgment, but on a wider scale than just a school setting. They may overlap if the school system is a product of the wider societal issues. Contrast with School Forced Us Together, where the school system acts to brings students with differing personalities and backgrounds together.