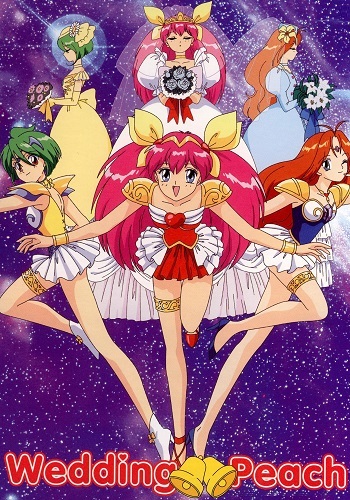 "...for that, I cannot forgive you! The Love Angel Wedding Peach is extremely displeased!"
— Wedding Peach's speech
Advertisement:

Wedding Peach is a Magical Girl story centered around a wedding motif. A mixed-media project from 1994, it was overseen by Sukehiro Tomita, known for being a major writer on the Sailor Moon series. The manga, illustrated by Nao Yazawa, ran for 6 volumes. The 51 episode anime was produced by KSS and OLM Incorporated and directed by Kunihiko Yuyama. Partially due to their shared writer and character designer, the story is often compared to Sailor Moon more than any other Magical Girl series.

Ordinary High-School Student Momoko Hanasaki dreams of getting married in a beautiful wedding dress someday, but in the meantime has to deal with getting bad grades, supporting her single father and working at the school paper with her two best friends, Yuri and Hinagiku.

One day, Momoko is awakened as the "Love Angel" Wedding Peach, a warrior in the ancient battle against devils and their queen Reine Devila, who hopes to rid the world of love and spread hatred among humanity. Accompanied by Yuri and Hinagiku as fellow Love Angels Lily and Daisy and occasionally aided by high-ranking angel Sir Limone, she wields The Power of Love granted to her by the goddess Aphrodite.

To ensure the triumph of good versus evil, they need to find the mythical Saint Something Four – while working out their own relationship dramas. Like their rivalry for the affection of the oblivious captain of the soccer team, Yanagiba, Momoko's complicated relationship with soccer team member Yousuke Fuuma, or protecting a ring left behind by her late mother that the devils seem to have an interest in.

Although the fight initially centers around solving love-related problems around town caused by devils, the ongoing war between the Angel and Devil Worlds turns out to have a lot more to do with Momoko than she thinks.