Manga / The World of Narue 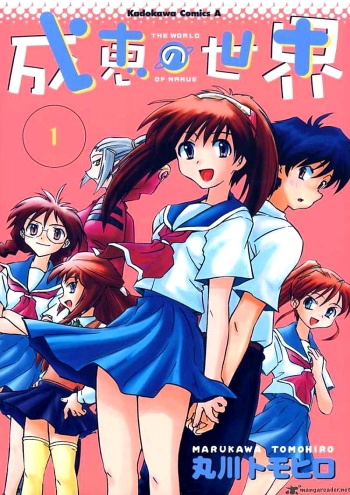 The World of Narue (Narue no Sekai) is a romantic comedy manga that ran in Shonen Ace from 1999 to 2012, with an anime adaptation in 2003. It follows the relationship of Narue Nanase and Kazuto Iizuka. Kazuto's a typical boy in middle school. On his way home from school one day, he encounters a cute dog that seems to be abandoned... and it tries to kill him. Help comes in the form of a middle school girl with a metal baseball bat, who tells him that it's not a dog, but a "dangerous space creature". She chases after the retreating dog-thing, leaving behind the bat. The next day, Kazuto uses the name "Nanase" on the bat to find his savior in the directory to thank her. When he finds her, he asks her to tea to thank her. She remains unconvinced of his sincerity. "Even if we're poor?" "Yes!" "Even if I'm gloomy?" "Yes!" "Even if I like to read women's magazines at the newsstands?" "Uh, sure?"

Narue Nanase is an alien living on Earth; Kazuto has gained himself an Alien Girlfriend. The anime follows their relationship, through ups and downs, Spaceship Women, days at the pool, all under the eyes of the Galaxy Federation.

Rounding out the cast are Maruo, Kazuto's friend and "Dr. Hunkenstein, Guru of Love", Yagi, Narue's classmate who doesn't believe Narue's story and goes out of her way to prove Narue's just human, Bathyscaphe, the personification of a spaceship, and quite an array of other strange characters. The show likes to go back and forth between Slice of Life and Science Fiction, never really settling on either one. Most of the time, the fact that Narue's an alien is played down, and the fact that she's an alien simply... comes up, from time to time.