Characters / The World of Narue

These are the characters of the 2003 anime and manga The World of Narue. Spoilers abound, so for those only familiar with the anime, you have been warned. 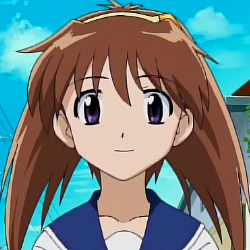 The title character, Narue is a pretty middle-schooler hailing from a really low-income family. A self-confessed "alien", it's not too surprising that Narue is considered an eccentric by many people, and had to endure a lot of bullying while she was growing up. Ironically, she really is an alien (well, half-alien anyway), and her mere presence on Earth makes her the focus of a lot of weirdness, to say the least. 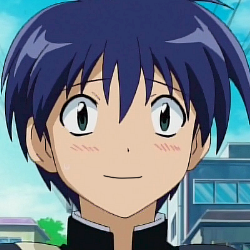 Narue's boyfriend, compared to his significant other Kazuto can be considered a relatively normal boy his age, from a normal middle-class family, though his mother does worry that he watchers too much anime for his own good. Kazuto is very devoted to Narue, and for all the weirdness she seems to attract, he's always there to help her to the best of his (very meager) abilities. 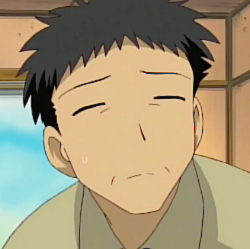 Narue's father, and the source of the alien half of her heritage. A former employee of the Surveillance Department sent to evaluate the technological level of Earth, he eventually settled down and married Narue's mother despite this being technically against the Union's non-interference rules. These days he does odd jobs, mostly roadwork, but barely makes ends meet for the family, a situation that eventually shapes Narue's perspective on money and spending in general. 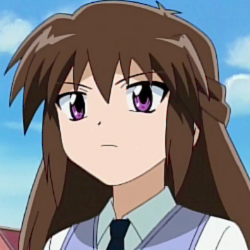 Narue's sister from her father's previous marriage, Kanaka is chronologically her older sister, a fact that she likes to remind everyone. She looks much younger than her age might suggest however, due to Time Dilation: the ship she stowed away on used "traditional" FTL instead of the near-instantaenous Gate transit, which meant that while only months passed for her, more than a decade had passed by on Earth. For all the babying she receives from Narue, Kanaka tries to look out for her sister as much as she could, as a good older sister should. 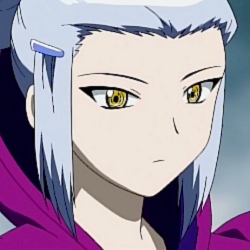 A battleship of Planet Japan, upon her "retirement" Bathyscaphe was assigned to be Kanaka's guardian after her father never returned from his evaluation assignment on Earth. In practice however this means that she acts more as Kanaka's mother more than anything else. She's acclimatized surprisingly well to the conditions on Earth, but that doesn't mean that she's lost her edge; when push comes to shove, she's still a battleship, and is more than willing to use those abilities to help the Nanase family. 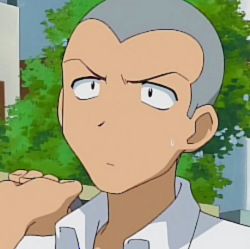 Kazuto's best buddy, Maruo is a member of the school's baseball team (which means he's a bit of a jock), and a self-styled expert on all things romantic. He's also surprisingly open-minded about a lot of things, which means whenever something strange happens to either Kazuto and Narue, or anyone else for that matter, he takes things in stride. 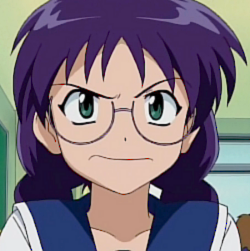 Maruo's childhood friend and next-door neighbor, Yagi is a science-fiction fan, and is particularly interested in subjects related to aliens and UFOs. While initially hostile to Narue (because despite being an "alien", she doesn't really fit the expected imagery of aliens in the fiction that she's read), she eventually becomes close friends with her. Her dream is to become a well-known science fiction novelist. 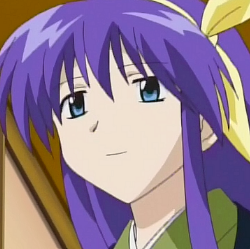 A high-speed escort ship of Planet Japan's space navy, Haruna ran away during one particularly stressful battle and goes into hiding on Earth. While she is initially terrified at being discovered by Bathyscaphe, once she is convinced that the battleship won't turn her in she quickly becomes close friends with the Nanase household (and indeed, it's the first place she runs to whenever she has problems). Although she started as a mere waitress for the seaside cafe and mountain inn she was working for, she eventually marries her boss, the heir to the inn. 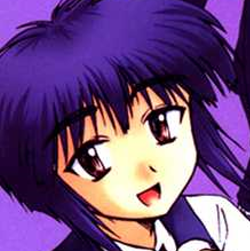 Narue's classmate from grade school and likely her oldest friend, Shiki is the manager of a bookstore specializing in used or old books. And while she doesn't look like it, she's also a member of one of the town's more established families. For the most part, she's content just minding the store, which used to belong to her beloved grandmother Setsu. 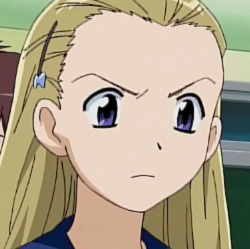 Pretty and popular, Kyouko is one of Narue and Yagi's classmates. In class she just loves picking on the two for their various eccentricities, making her the Alpha Bitch of their class, but outside of it she's surprisingly thoughtful and nice. She befriends Akira Nitta, due to a shared experience as well as similar lovelife troubles. 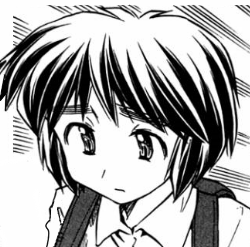 Another of Kazuto and Narue's classmates, Akira is part of the library committee and is usually left in charge of the library whenever the librarian is out. He and Kyouko have a strange friendship, born out of a shared experience as well as being similar circumstances in love. Incidentally he's also Shiki's cousin. 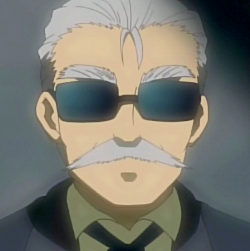 The on-site supervisor of the Galactic Union forces observing Earth. While officially sticking to a "hands-off" policy with regards to the inhabitants of the planet, he gives the Nanase family some leeway with regards to their activities, as long as they don't do anything that would reveal the existence of the Union (or any other stellar power). 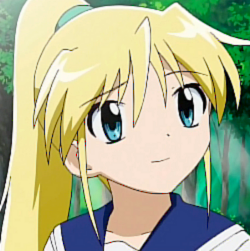 The first member of the Surveillance Trio that Narue and Kazuto meet, Rin is an intelligence-type humanoid mecha with the ability to modify memories. In many ways, Rin is the most down-to-earth of the three Surveillance Bureau mecha, and is the most comfortable in interacting with the locals, making friends very easily. 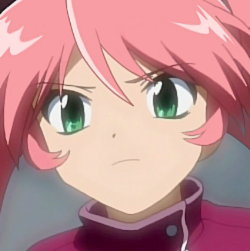 Another member of the Surveillance Bureau team watching over the Nanase family, Ran is a fighter-class mecha, which means that when things become physical she's usually the first to be called in. Compared to her partner Rei, Ran is more prone to emotional outbursts and not thinking things through before acting. 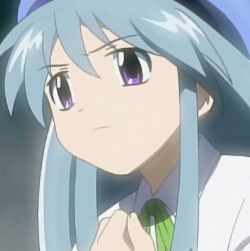 The last member of the Surveillance Bureau trio, Rei is a fighter-class mecha like her friend Ran. Compared to either Rin or Ran, Rei is much more calm and thoughtful, though she does still have her moments. 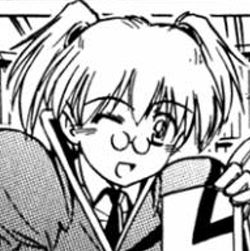 One of the many Galactic Union starships orbiting Earth, Shirase is the one tasked with filtering and transmitting messages to and from the planet. This makes her as a virtual information hub, and a great source of data, at least in the area of space close to the gate to Planet Japan. 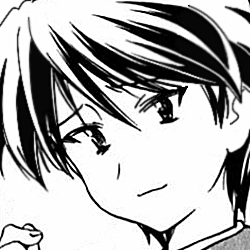 Kanaka's mom and Tadashi's ex-wife, Haruka is a serving captain in Planet Japan's space forces. Her duties usually keep her away from her family for long stretches of time, and as a result she grew estranged from her own daughter. Although she personally thinks it's far too late to make it up to Kanaka, she will still do her best to help her daughter within the limits of her position. 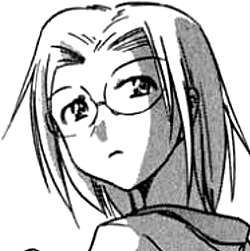 A member of the Avalonian military, Uni was initially sent to Earth in part to watch over and protect the Nanase family and its friends, as well as collect evidence to help prove the United Star's theory of the real significance of Earth. She's grown a little too comfortable with her role as a teacher in Narue and Kazuto's school, and on some level questions the motivations of her superiors. 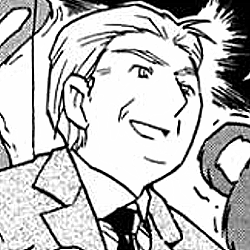 The current president of the United Stars is, to put it lightly, a man with an agenda. He's fully against the Galactic Union's "intervention" on Earth, and with good reason: like many in the upper echelons of his government, he believes that Earth is the origin of their civilization, though how this is possible is one of the points of contention between his country and the Union. Nominally reasonable, when one gets to the bottom of it he just wants the Galactic Union out... and have the United Stars step in to "oversee" Earth's development. 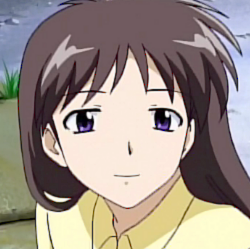 Narue's mother. A poet vacationing at her brother's house, she helped save Tadashi from drowning in the local river. After a misunderstanding with the Surveillance Department, she takes Tadashi and flees to Sakura Town, where the two eventually marry. She dies after saving Narue from being run over by a car, and as of the start of the story she has been deceased for five years, but her influence on Narue still remains strong. 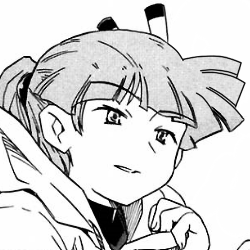 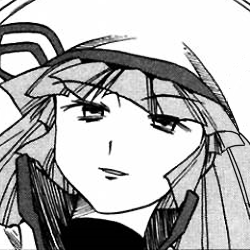 A pair of mercenary sisters from Planet Russia that was hired by the United Stars to capture and "escort" Narue and Kazuto to a tense conference between them and the Galactic Union. They don't really care that much for the ideologies of who hire them, but once contracted they will make sure (or at least try anyway) to make sure the conditions are fulfilled. 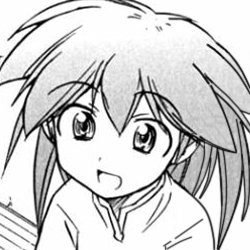 A child that hatched from an egg that Kazuto and Narue found one day while on the way back from school. She seems both mecha and organic at the same time, a fact that confounds the Surveillance Department trio. As her organic segment seems to have based itself on both Kazuto and Narue, this means that Tetra is on some level their daughter. Since the both of them have classes to go to, Tetra is left under Rin's care for the day.