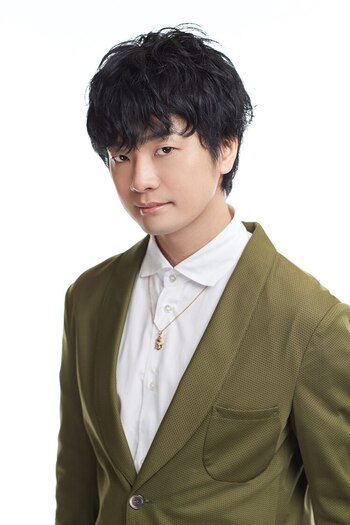 Jun Fukuyama commands you to describe him. WITH ALL YOUR STRENGTH!!!
Advertisement:

YES, YOUR MAJESTY! Jun Fukuyama (born November 26, 1978) is a very interesting seiyuu, when it comes to his role history. At first, you won't notice him much. He usually plays typical straightforward heroes, or someone with a childish personality (something of a Sheltered Aristocrat, or Idiot Hero) or as a Wholesome Crossdresser. These examples include Albert de Morcerf of Gankutsuou, Kyle Dunamis of Tales of Destiny 2, or Touga Tenkuuji of Gravion. Even when he tries deviating a bit as Yumichika Ayasegawa in Bleach... he didn't get a lot of fame.

Until Code Geass that is.

In Code Geass, he got deliberately cast against type as the Manipulative Bastard Lelouch Lamperouge. As the series garnered a lot of popularity, so did Fukuyama's career, thanks to his perfect performance. This role led him to be one of the most famous seiyuus of the current age, and lands him lots of roles, specifically those with the aforementioned Manipulative Bastard qualities. (The same could be said about Johnny Yong Bosch, who voiced Lelouch in the English dub.)

On the other hand, Fukuyama has lent his voice for many romantic comedy series throughout his entire voice acting career, sometimes as the male lead. Examples include Takaaki Kono, Keita Kawahira, and Kei Takishima.

After his success in Code Geass he went off to be a complete pervert using his Lelouch voice in Akikan! and The Girl Who Leapt Through Space. He also played the humble merchant Lawrence in Spice and Wolf, a character with some form of Evil Eye with Ryner in The Legend of the Legendary Heroes, the voice for Cookie's battle form in Majikoi! Love Me Seriously!, Suguru Aizawa in Area no Kishi. He is currently using this tone of voice for the young prince of Qin, Zheng from Kingdom and as Dark Flame Master whenever Yuuta delusions occasionally surface.

A popular Fan Nickname for him was "Mr. Cellphone Spoiler", on account of him using his cell phone to access 2ch and posting Code Geass spoilers "anonymously".

Additionally, since Fukuyama was raised in the the Kansai prefecture (more exactly, the city of Takatsuki), he can use Kansai Regional Accent in some of his roles. Specially seen when he voiced Kenya Oshitari, an Osaka native, in The Prince of Tennis.

Not to be confused with Jun Fukushima.

Nurufufufufufu....
The description's over. ALL HAIL JUN FUKUYAMA!!!