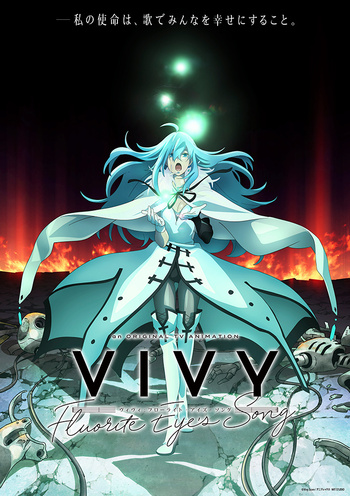 "Your mission is to make everyone happy by singing. To accomplish that, you must sing with all your heart."
"Starting now, this is the type of journey we'll be taking, Diva. [...] It is all for the sake of preventing the excessive evolution of A.I.s, and to keep the war of the future from breaking out. This is where your hundred-year journey begins."
—Matsumoto, to Vivy (Diva)
Advertisement:

In the year 2161, on an Earth where Artificial Intelligences have long lived alongside humanity, the NiaLand amusement park has descended into chaos and bloodshed as A.I.s rampage through the streets and attractions with smiles on their faces, ruthlessly murdering any humans they come across. Not just NiaLand, but the entire world has been overtaken by a massive A.I. rebellion at precisely the same moment, and within minutes, ten thousand humans are dead. Determined to avert this terrible future, an aging A.I. researcher enacts a desperate plan, using a time machine in his final moments to send data one hundred years into the past within the code of the world's first fully autonomous A.I., a musical robot named "Diva" whose original mission is "to make everyone happy by singing".

In the year 2061, Diva ends her latest performance on a small stage at NiaLand to an audience of three, then goes backstage to talk with her only human friend, a young girl named Momoka, who after their first meeting christened the songstress "Vivy" after a picture-book character she resembles. Giving the A.I. an early birthday present in the form of a high-tech stuffed bear, Momoka secures a promise from Vivy that she will one day sing on NiaLand's Main Stage. Her friend departing, Vivy steps back onto the stage to sing to an empty audience... and then packets of data from the future hit her.

Taking on the name of his developer, "Matsumoto", the A.I. program from the future inhabits Vivy's new stuffed bear and, in spite of her protests, enlists her in "the Singularity Project", his mission to covertly change history and avert the coming war between humans and A.I.s, a mission she is dragged into whether she likes it or not.

Premiering on April 3, 2021, Vivy: Fluorite Eye's Song is a 13-episode Anime Original by Wit Studio with a story jointly written by Tappei Nagatsuki and Eiji Umehara.