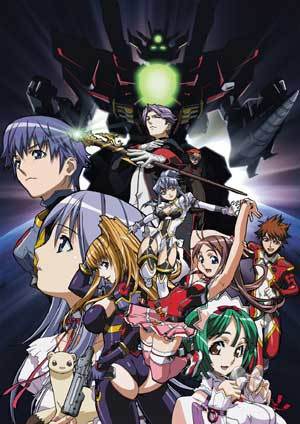 Soldiers of the Gran Knights, Combine!

Chōjūshin (Super-Heavy God) Gravion is a 13-episode Super Robot series directed by Masami Obari and released in 2002 by GONZO. Think GaoGaiGar loaded with maids instead of Hot-Blooded Autobot Expies, while the titular robot follows the Combining Mecha formula with Five-Man Band, which has been perfected with the likes of Combattler V and Voltes V (and with more ladies too, there's only two male pilots).

The Earth's about to come under attack by an alien race called the Zeravire. However, a mysterious billionaire named Klein Sandman has prepared for the invasion with God Gravion, a Super Robot that uses the power of gravity to fight. The protagonist is Eiji Shigure, a young man who infiltrates Sandman's St. Germain Castle in search of his missing older sister Ayaka, and is recruited as part of the Gran Knights. The story is given a different slant: although Eiji is the main character, he's effectively The Lancer of this particular Six Man Band, piloting the G-Attacker, the God Gravion's right leg, rather than being the main pilot.

The series seems to come to an abrupt end, but is concluded in the 12-episode sequel Gravion Zwei, which answers many of the series' major mysteries and finally promotes Eiji to the actual lancer seat of the Sol Gravion.

Some of the characters make cameos in Dancougar Nova, the remake/sequel to Dancougar, and some viewers consider it to be the unoffical "third season" of the show.

Most definitely not to be confused with Gravitation.