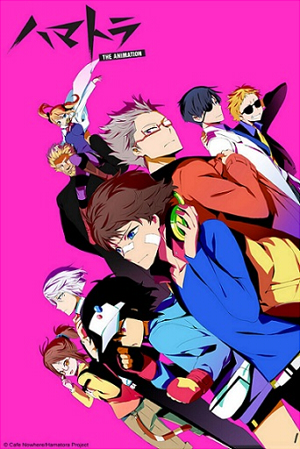 In this world, a small percentage of the population has superpowers, and these people are called Minimum Holders. The series follows a group of detectives, who are all Minimum Holders, and their adventures as they take cases throughout Yokohama City. Meanwhile, the Yokohama police are completely puzzled trying to solve the case of a Serial Killer who targets only Minimum Holders...

Hamatora is a mixed-media project created by Natsu Matsumai and Yūki Kodama. It has a manga by Yukino Kitajima and Yūki Kodama published in Weekly Young Jump magazine starting in November 13 2013, an anime airing from January 9 as part of the Winter 2014 lineup, and a 3DS video game called Hamatora: Look at Smoking World was released in summer of 2014. A second season of the anime aired in the summer 2014 lineup.

Definitely should not be confused with Hamtaro.

The tropes in this series include: