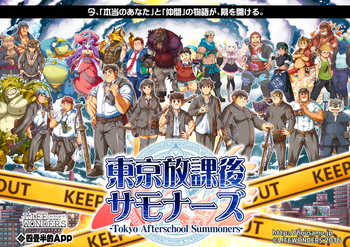 Build. Buy. Battle. Bears!
You are a summoner from another world who obtained a sacred treasure of a divine sword cut off from the tail of a dragon. They carry all elemental attributes, and the power of disconnection that lies in their sword has the power to divide control and power. As compensation for being a "wanderer," they have been "exiled from their birthplace." One day, a magical power sends you to a different version of Tokyo. There, you will gather companions and develop your story in this card-based RPG.
Advertisement:

In this Tokyo, 23 mysterious pillars of light appeared suddenly one day. These pillars are known as Gates, connecting Tokyo to 23 different worlds, each one based on a different mythology or story. The beings that inhabit these worlds are known as Transients, and after crossing into this world, together with humans and like minded Transients who share the same philosophy, form guilds and compete in The Game.

The Worlds known currently are as follows:

Tokyo Afterschool Summoners (Tokyo Houkago Summoners), also known as Housamo, is a mobile game developed by Life Wonders. Defined as a "Card Battle RPG", the game is targeted towards LGBT individuals, with 95% of the game's cast being gay. The player can choose from up to 5 appearances for his, her, or their main character, collect cards and companions, choose selections in a story, and battle foes in a grid-based RPG system.

The game launched in December 2016. Though still technically a Japan-only game, most iOS users can download the game from the App store. Since August 2018, the game is also available on Android's Play Store.

Beginning late 2017, after thousands of requests from international players, Housamo has begun to include translations of the main quest in fragments — in English, Simplified Chinese and Traditional Chinese. Additionally, fan translations of most special and character quests are available on the Housamo wiki, with an active fan community updating the pages regularly.

Game has a character sheet- feel free to contribute.

This gacha provides examples of: