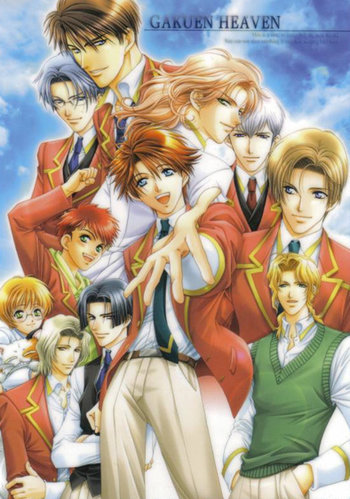 It all started when Keita Ito received a letter sealed with the initials for BL Academy, the most sophisticated all-boys academy in the country. Keita Ito has been accepted into the school with an average GPA, as well as average skills in sports and writing, and doesn't think that he belongs there. But with help from the other students, will he be able to make it in BLA? (summary taken from ANN)

Started as an (explicit) Boys Love Game, then adapted into a considerably less explicit PlayStation 2 port, a similarly tame anime and two manga series by You Higuri which resemble the original game (available in English from Tokyopop's BLU imprint- one condenses four of the VN routes into a single bound volume each note The routes are: Niwa, Nakajima, Kazuki, Shichijo - the last being the only one unavailable in English and the second, Gakuen Heaven Revolution, merges all of the routes' stories into one series of events), as well as various drama CDs and other ancillary merchandise (including a sequel of sorts).