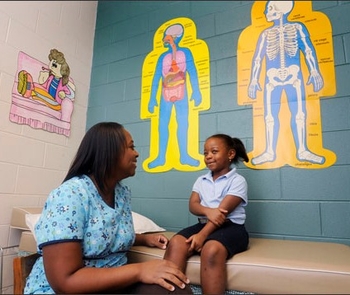 "Now see, that didn't hurt a bit. Back to detention!"
Advertisement:

The Medic of the school, the School Nurse is the local health professional responsible for caring for injuries sustained during gym class or schoolyard brawls and otherwise helping students with their health problems. Some school nurses also multitask as student counselors, giving students advice on their personal problems, and others might even hold a health care class or two.

In the world of anime and manga, the school nurse is almost Always Female, twentysomething, and extremely attractive. They tend to do their hair in buns, wear corrective lenses and white labcoats, combining aspects of Hot Librarian, Hot Scientist, and Hospital Hottie. For most intents and purposes, however, attractive school nurses count predominantly as Hot Teachers, being school staff over a librarian, scientist or physician.

In Western productions, however, the reverse is often true. In these works, the school nurse is middle-aged, rather ugly, and generally grumpy about having to take care of so many snot-nosed brats (very similar to the lunch lady). Comedy works often portray her as something akin to a Torture Technician, using all sorts of excuses to poke, prod, and jam needles into our plucky protagonists. Much of this portrayal is a homage to Nurse Ratched from One Flew Over the Cuckoo's Nest.

The school nurse is often the other part of a Two-Teacher School, and perhaps due to the aforementioned counselor associations she tends to be the one on closer terms with the school-aged main cast, serving as a Psychologist Teacher, Reasonable Authority Figure and/or a Cool Big Sis.

With budget cuts to schools and increasing worries about liability over treatment provided to students, the school nurse is at risk of becoming a Dead Horse Trope, at least in North American schools.